She died of a fever,
And no one could save her,
And that was the end of sweet Molly Malone.
But her ghost wheels her barrow,
Through streets broad and narrow,
Crying, “Cockles and mussels, alive, alive, oh!”

Following the spirit of Molly, the film demonstrates the fragility of a vibrant culture, and with so many closures, including of the Dublin Flea Market which had to shut up shop due to the lack of a venue for its Christmas market last year. This loss of colour and character to the city is incalculable.

Shot in stages over many years, the documentary contains rare archive footage, capturing the demolition of tenement homes immortalized in the plays of Sean O Casey, as well as vintage shots of U2 in their formative stage as they play an inner–city concert. 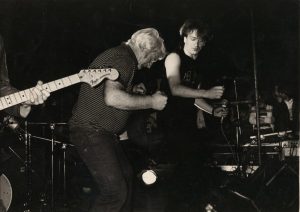 U2 on Sheriff Street. Photo courtesy of Christine Bond.

There are also disturbing scenes of street traders being harassed by police, and we witness the last day of trading in the Iveagh Market, with one trader opining: ‘whatever happened to Molly Malone and the city’s pride in her’. It also includes an interview with the independent politician Tony Gregory in which he recalls being incarcerated for defending street traders’ rights.

This is an unprecedented record of the suppression by the State of Dublin’s traditional street traders, the closure of marketplaces, as well as the heroin epidemic that devastated inner city communities in the 1980s. The collection also contains moving recordings of actor Jasmine Russell reading verse especially commissioned from Paula Meehan, now the chair of Poetry Ireland, as well as traditional Dublin ballads sung by musicologist Frank Harte.

We spoke with Sé (over the phone unfortunately from where he is self-isolating in London). He first describes how he had made his first film in 1982 called Looking On, which is set in the North Inner City against a backdrop of civil strife, and the emergence of a yuppie culture that brought speculators into an area considered ‘ripe’.

He recalls that Tony Gregory had by then won a few battles, especially after he agreed to support Taoiseach Charlie Haughey after the 1987 election, the so-called Haughey-Gregory Pact, in exchange for gaining crucial financial assistance for the inner city in return. Social housing had by then been built, but the persecution of street traders continued unabated.

I saw a pram dealer on Henry Street have her wheels removed by the Gardai. The Dublin Chamber of Commerce were promoting the removal of traders on behalf of the shopping district. Ironically the women who loaded up on produce bought in the fruit and vegetable market would normally go to Dunnes Stores and fill their prams with their own household purchases at the end of the day.

A notion came into my head. Here was the city singing ‘Alive Alive O’ at football matches, while at the end of rich Grafton Street there is statue of Molly. My family all come from the Liberties and some had been street traders, and so a new film began that would also use footage from Looking On.

Sé said he wanted this film to be lyrical, so he brought in Paula Meehan to add poetry and Frank Harte to sing traditional ballads. ‘A highlight,’ he said, was ‘filming the last days trading at the Iveagh Markets’

Eternally mischievous, Sé reveals how, after the market was closed for the last time, he bribed a security guard to let him back in, and then brought in the old traders to whom he showed old footage of the market to see what would happen. That became the last scene.

According to Sé, raising the money ‘ was a nightmare. I got a small grant from the Arts Council, then another small amount from the Irish Film Board and eventually RTÉ came on board and the film was born.’

The film was premiered at the Cork Film Festival in 2001, and won a number of awards, including at the Galway Film Fleadh. In 2009 it was the official representative of Ireland at the Doc Europa Festival in Lisbon, Portugal.

The Iveagh Market is still closed and mired in controversy. Sé reckons that ‘markets in general are victimised by red tape and speculators wanting their patches. Alive Alive O!’