After working for the Mary Robinson Foundation – Climate Justice at global conferences, Sean McCabe is now relishing the chance to represent the local concerns of his Phibsborough community. He intends to bring meaningful improvements to people’s lives, and help build community-owned initiative to tackle threats posed by climate change and inequality. Cassandra Voices interviews this first-time independent candidate in the May 24th election.

What motivated you to enter politics?

I think we are all in politics whether we like it or not. In January 2010 I moved to Calcutta, India where I spent a little under two years working in a hospice, serving people whose lives were devastated and extinguished by poverty. It was a formative time. The depth of injustice made me angry and shaped how I understood life and my opportunities in it. I made a promise to myself that I would use whatever ability I have to serve people. I think lots of us feel like that – we want to contribute positively to society and support the people around us – but maybe we don’t necessarily look to politics as an avenue to achieve this. Back then, in the aftermath of the Financial Crisis, I didn’t have much faith in the political system.

My understanding evolved in the years after I returned home. It took time to find the type of work I wanted to do. I had studied physics and worked in finance for several years, so transitioning to people-focused work was not easily done. That was a difficult time, full of uncertainty which, after time, can lead you to doubt the path you’re on. If anyone told me then I would go on to spend five years working closely with Mary Robinson, I’d have thought they were mad.

But that’s how it turned out. My work with the Mary Robinson Foundation – Climate Justice shaped my understanding of political engagement, and the right to participate in society. A focus of our work was ensuring that people with lived experience of the impacts of climate change had their voices heard during international negotiations around climate and sustainable development. I had the opportunity to listen to, and learn from, many conversations where community leaders, mostly women, told their truth to world leaders and decision-makers. I grew to understand the importance of meaningful participation in addressing injustice. In this time I also became involved in projects related to homelessness, Direct Provision and mental health.

The injustices that exist in Ireland and elsewhere will only be overcome by communities engaging directly with the decision-making processes that affect our lives. Similarly, to tackle climate change and build a sustainable, safe future, we will have to ensure that anyone can participate meaningfully in the design of action, and benefit from sustainable development. So in answer to the question, I am not motivated to enter politics, I am motivated to play my part in addressing the serious challenges of our time. I see participation as fundamental to addressing these challenges and that is why I am running in the local elections.

Are there specifics polices for your local area that you are focusing on?

We are hoping to secure a voice for the Phibsborough community on Dublin City Council. Due to adjustments to the Local Area boundaries, 2019 is the first time all of Phibsborough will be voting in the same constituency. This gives us an important opportunity to address a lack of long-term investment in the area.

I want to ensure the redevelopment of Dalymount Park goes ahead. It offers a wonderful opportunity to significantly enhance community life in the area as the plans includes cultural and recreational facilities. A concerted political push is required to ensure it receives the funding it requires. I also want to address the issue of traffic in Phibsborough. Despite relatively low levels of car ownership, the community is dominated by the roads that divide it. I want to work to deliver infrastructure improvements that ensure that pedestrians and cyclists can move safely and effectively. I want to see Bus Connects and Metro North developed in as inclusive a manner as possible to avoid potentially regressive impacts on the area.

I will also work to ensure the community start seeing the benefits of climate action through renewable energy cooperatives that can reduce heating and electricity bills, as well as carbon footprints.

We are taking note of lots of other issues coming up on the doorsteps, including illegal dumping which suggests a lack of pride in the area that we aim to address.

Another concern is the prevalence of anti-social behaviour and crime. This needs to be addressed firstly with enhanced community policing, but also through development and enhancement of youth services.

I also want to help create a local food cooperative along with more allotments and urban gardens which will enhance biodiversity. 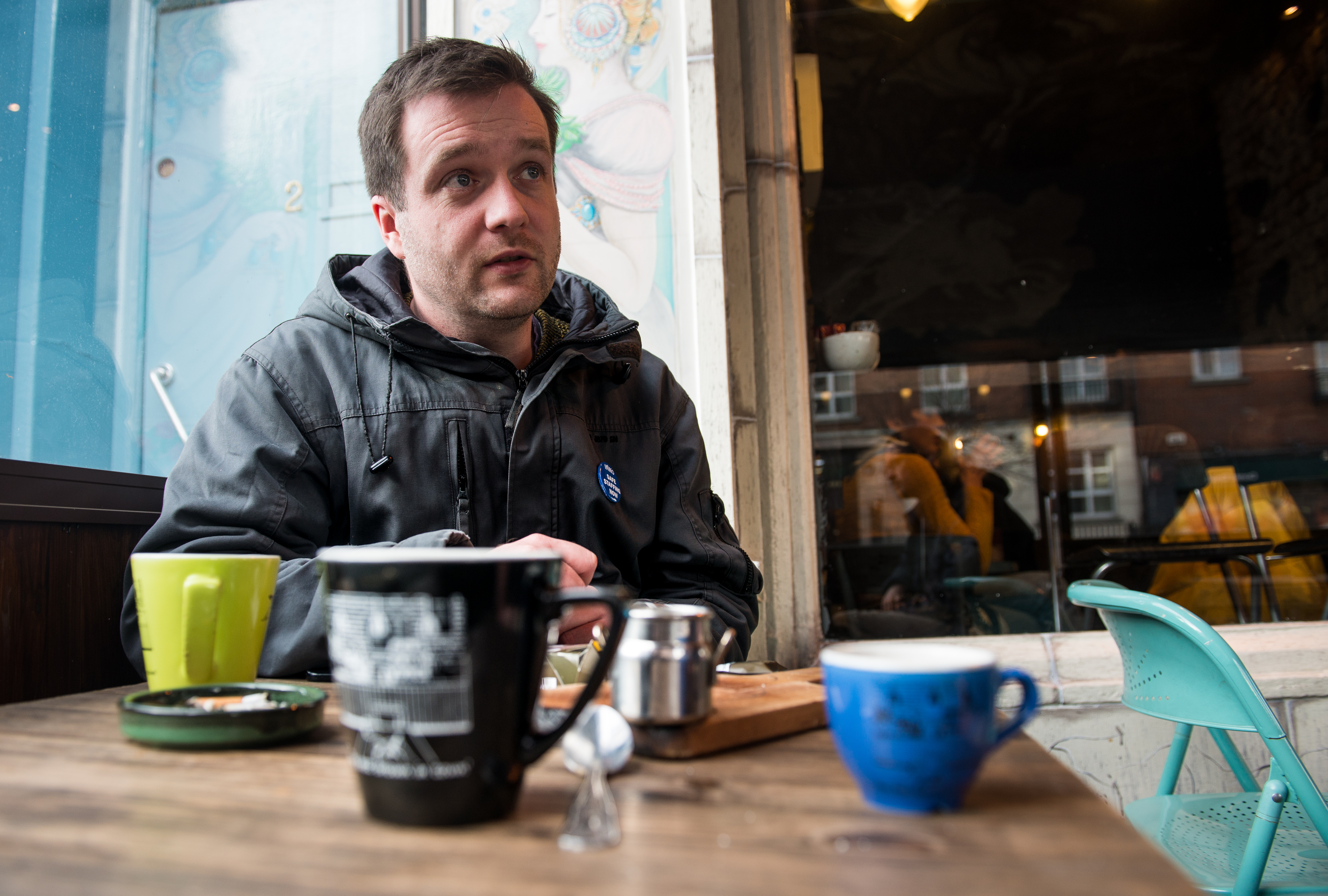 Why did you choose to run in the local elections rather than a general election?

They are different very different roles. My decision to run in the local elections is based on a belief that local government has a very important role to play in mobilising the action required to create a fairer, more inclusive and sustainable world.

I was in New York in September 2015 for the adoption of the United Nation’s 2030 Agenda for Sustainable Development. The 2030 Agenda was signed by 193 countries and applies to all. Through it, world leaders committed to eradicating poverty, addressing inequality, and protecting our planet for present and future generations.

During the celebrations at the United Nations Headquarters I remember feeling a million miles away from the communities that this agenda is supposed to help. I felt the ambition was not matched by a concrete understanding of how ownership would be passed to regular people and communities. We must have communities around the world that are empowered with the information, tools and resources to implement the seventeen Sustainable Development Goals contained within the 2030 Agenda. Only then will we be able to create the world free of suffering and want which the 2030 Agenda calls for.

The past three decades have seen the edge being taken off community agency in Ireland with people encouraged to view themselves as individual consumers, rather than citizens and community members. But that spirit still exists and is ready to build a fairer, sustainable and more compassionate society, it just needs to be set free.

I love living in Phibsborough because I’m surrounded by people who dedicate their time and energy to their community. There is an abundance of grassroots organisations, actively enhancing social, cultural and environmental wellbeing. Even Bohs is a collective, member-owned football club run by volunteers. It’s remarkable!

Local government should be facilitating and building on this active engagement. Together we can channel the agency that exists within our communities and develop a new approach to local governance in Ireland; one based on deliberative democracy, where people participate meaningfully in the decision-making processes, to the benefit of everybody.

To address poverty, inequality and climate change, we must start with local solutions, building the world we want from the ground up.

How do you intend to get yourself elected?

I want this campaign to be inclusive and participative, and we are planning a few community-based direct-action projects that will hopefully encourage people to consider the role of local government in their lives.

Traditional canvassing also plays an important role. A great team has been coming out with me, as we seek to understand the specific needs of the community.

This is a grassroots campaign. We would love for people to join in and take part – even if they have no prior experience in this kind of thing. The more people we have, the more we can do. We want to have fun doing it too. People can get involved by messaging us through Facebook or sending me an email on [email protected]

How do you overcome voter apathy?

I’m not sure I have the resources to address that as an individual candidate. I want to avoid the type of cynical campaigning that I think contributes to voter apathy. We have a set of principles that govern our campaign which include taking the people we meet, and their concerns, seriously; avoiding echo chambers; not stealing ideas from, or taking credit for, community initiatives; not undermining other candidates; and ensuring complete transparency. We are publishing the campaign incomings and outgoings live online. My hope is that constituents will recognise our approach has integrity and that this will encourage participation in local politics.

Why did you choose to run as an independent rather seeking the nomination of one of the established political parties?

I don’t really see the point of political parties at a local level. Local government should be about empowering communities by electing representatives to the council that give them a direct channel to the decision-making table. Party politics is the antithesis of this. As a member of a political party, I think it seems inevitable that, on occasion, it would be necessary to put the interests of the party ahead of the community. That just seems wrong to me.  I want to see community-led local government, where deliberative approaches are used to seek common ground, sharing the benefits and burdens of administration across the city.

Which of the parties would your ideas tend to align you with and are there any political parties that you would not work with?

That is hard to answer. I prefer to see public representatives as individuals and decide how best to work with them based on the substance of the proposals they wish to bring forward. Unfortunately however, especially at local level, party politics can cloud decision-making processes and risk obscuring priorities.

Which writers have inspired your political ideas?

That’s a difficult question. I don’t sit around reading books on political theory. I’m inspired by writers like John Steinbeck, Boris Pasternack, Amartya Sen and Maya Angelou. I just finished reading Fredrick Douglas’s Narrative which is a remarkable account of unrelenting courage in the face of oppression in all its forms. Musicians like Luke Kelly, Woody Guthrie, Harry Bellefonte, Dominic Behan, Kris Kristofferson, Ewan MacColl and Paul Robeson, and their life stories, have shaped my political outlook as much as writers.

What is the burning political question of our time?

I suppose the simple answer is how are we going to muster the political courage to tackle climate change. The more complex answer is how to build a movement based on solidarity to secure climate justice. Climate change confronts us with our interdependence. No country or leader alone can change course. If we do not find a way of including everyone in a transition to a green, low carbon economy, then we are facing an existential crisis.

The impacts could occur a lot sooner than most people are anticipating, and there is no technological silver bullet to save us. We need solidarity – locally, nationally and globally. The children’s climate strike gives me hope. They are fighting for their future. Our communities and our leaders must listen to them.

What further ambitions do you have for your political career?

Right now, I’m only concerned with running an inclusive and participatory campaign until the May 24th local election. Let’s see what happens then. Whether successful or not, my ambition is to continue working with the community to play my part in addressing the challenges we face. I have no grand plan!

If you were Taoiseach for the day what would you do?

Not much that can be achieved in a single day. I would probably pay a surprise visit to a Direct Provision centre and then spend the night typing up detailed notes of my conversations there for whoever was taking up the office after me.