The Harp needs more than tuning. The single most important and useful change we should make to our Constitution is to remove the first paragraph of Article 45 which reads:

The principles of social policy set forth in this article are intended for the general guidance of the Oireachtas. The application of those principles in the making of laws shall be the care of the Oireachtas exclusively, and shall not be cognisable by any court under any of the provisions of this constitution.

As detailed below, this article provides clear instruction to the Oireachtas to ensure the material welfare of the people, but, crucially, prevents any meaningful judicial enforcement.

There is so much to welcome here. It is clear, humane, balanced, and entirely workable. Sadly, our Constitution grants the Oireachtas, and hence the Government, a judicial free-hand, and so allows them to ignore their responsibilities.

An amendment to remove the offending ‘cognisable’ clause, highlighted above, would allow judicial oversight of the vast majority of Government business, requiring efficiency, charity and compassion.

There is limited jurisprudence on the matter. Initially the courts refused to countenance any argument appealing to Article 45, but it has also served as guidance, insofar as it has been used to inform decisions. This progressive approach to allow reference to the Article has yet to be accepted by the Supreme Court, and current conservative thinking reckons it to be clearly beyond the competence of any court: ‘an invalid usurpation of legislative authority’, and a breach of the separation of powers.

Quite apart from rendering these goals easily ignored by the government, as citizens we have no recourse in law against any government for failing in its duties. Witness the Housing Crisis, Direct Provision, wage inequality, the gap between the minimum and a living wage, the destruction of natural habitats, commercial exploitation of natural resources, multinational tax avoidance, and the general inefficiency of public services, especially health care in all its forms.

Instead, our government suggests we turn our attention to the Blasphemy clause. This is welcome among secularists, profoundly uncomfortable for the devout, and so will stir a lot of debate but it will make no meaningful difference to the lives of people.

Consider one issue afflicting the Nation: the Housing Crisis

The ideology that free markets are inherently efficient is rampant across the world, and clearly evident in Ireland. The common belief that only very lightly regulated business can achieve efficiencies unobtainable in the public sector is especially clear in our Government’s current policies. This avoids both the fundamental conceptual problem of measuring efficiency in terms of money, or more generally wealth creation, and also breaches sections 1, 2-ii, 2-iii, 2-iv, 2-v, 3-ii, and 4-1 of Artcle 45.

Rents are rising rapidly, and are already 23% above the pre-Recession peak.

Rather than exercise Eminent Domain and issue Compulsory Purchase Orders, an old and well established technique of Government, to buy and re-use exiting property to house families, the Oireachtas is considering the Home Building Finance Ireland Bill, which proposes:

The Bill facilitates funding of HBFI from resources currently held by the Irish Strategic Investment Fund (ISIF), the granting of the necessary power to the National Treasury Management Agency (NTMA) to provide staff and services to HBFI on a cost recoverable basis, the granting of specific powers to HBFI to enable it to carry on the business of residential development finance, and ensures appropriate accountability for HBFI.

This overtly favours property developers, contrary to the common good. Indeed, the cost of administering this HBFI will likely run to many millions, millions which could be spent directly by the Government on building and maintaining public housing.

that in what pertains to the control of credit the constant and predominant aim shall be the welfare of the people as a whole.

This bill favours developers over the people who are in most need of housing. It is against the spirit of Article 45, but our current Government is happier delegating responsibility to poorly overseen private quangos. This is just one example of why we need to be able to challenge our Government in our Courts.

Were we to remove the offending paragraph we could not only pursue our indolent government in our Courts for their derelictions of duties to the people; we could also ensure that all future legislation would take full account of our socio-economic rights.

This is not a charter for vexatious litigants, it should not and would not allow suit against the Government for minor infringements. The Supreme Court is, by necessity, selective in the cases it hears, and once a matter is decided there the precedent is binding on lower courts. But the doctrine of Separation of Powers should not allow the Supreme Court to deny jurisdiction over any part of our Law. 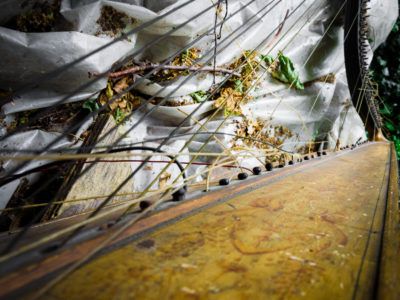 Let us recall that these principles of Article 45 are already for the guidance of the Oireachtas. That our elected representatives neglect their responsibilities is nothing short of abhorrent.

It is our Constitution and we must change it. It is up to us as citizens to elect representatives that will introduce legislation for a referendum to fix this broken string.