Over the last seven years, I have been reshaping my practice from being primarily hermetic, manual and materially fixated into a more fugitive, performative state. Around 2015, I had a rising feeling that my drawings, prints and collages no longer had the capacity to hold the kinds of storytelling and speculation that I needed to transmit. I was frustrated that my core desires: to communicate, speculate, pronounce, denounce, seduce and lead up the garden path, were being limited by what I had come to view as the chicanery of my materials. 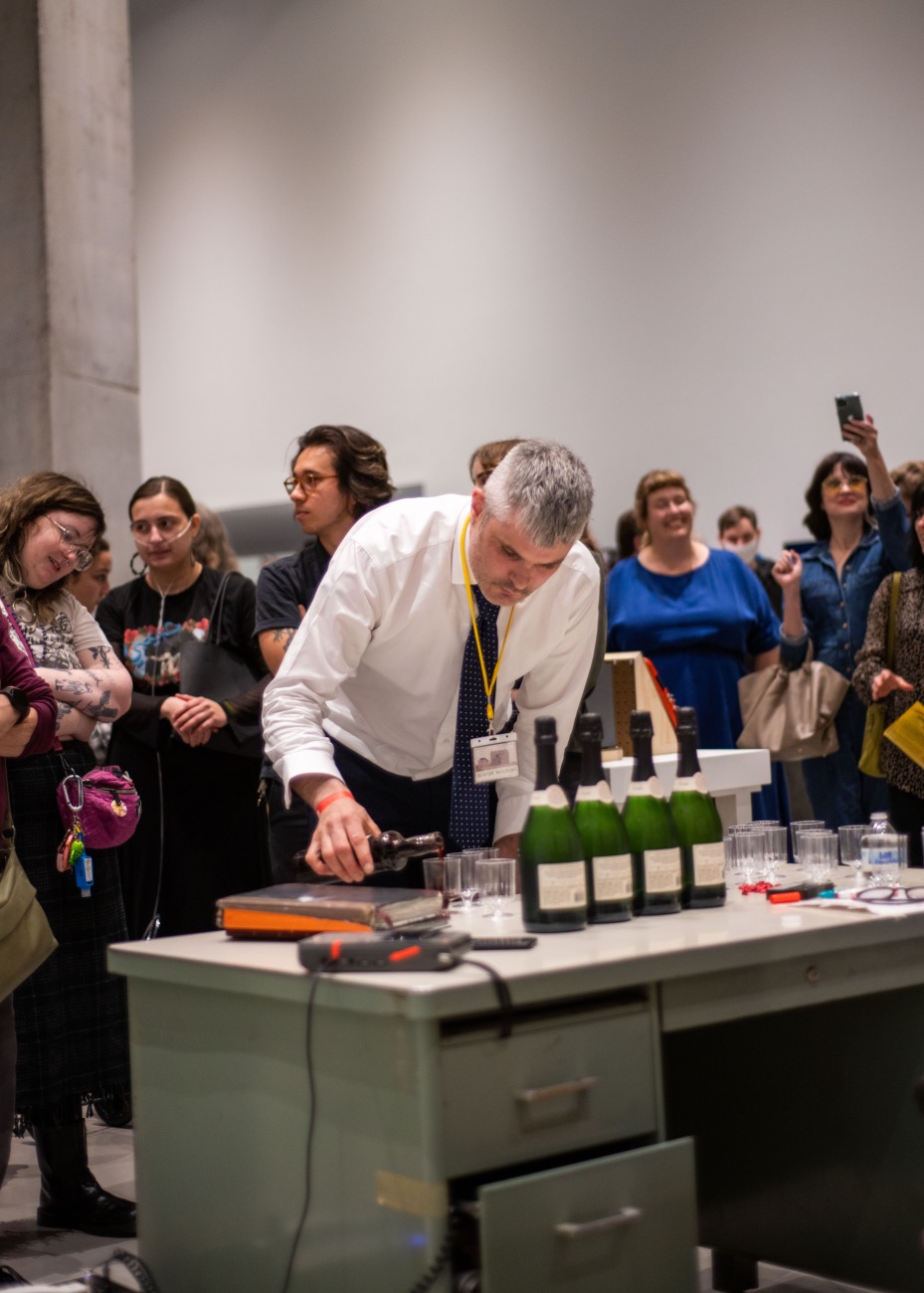 One of very few consistent back-channels to my material practice that stayed open during the rearrangement process was a project called Going Postal. In 2013 I had entered into an iron clad arrangement with the MSURS – the Museum of Contemporary Art of Republika Srpska (the Serb part of Bosnia). I had solemnly committed to sending them a flat artefact, unenveloped in the postal system at least four times annually until my projected year of death in 2077.  I have faithfully maintained this undertaking over the years and when the project concludes on 19/11/2077, 256 items will have been integrated into their collection. 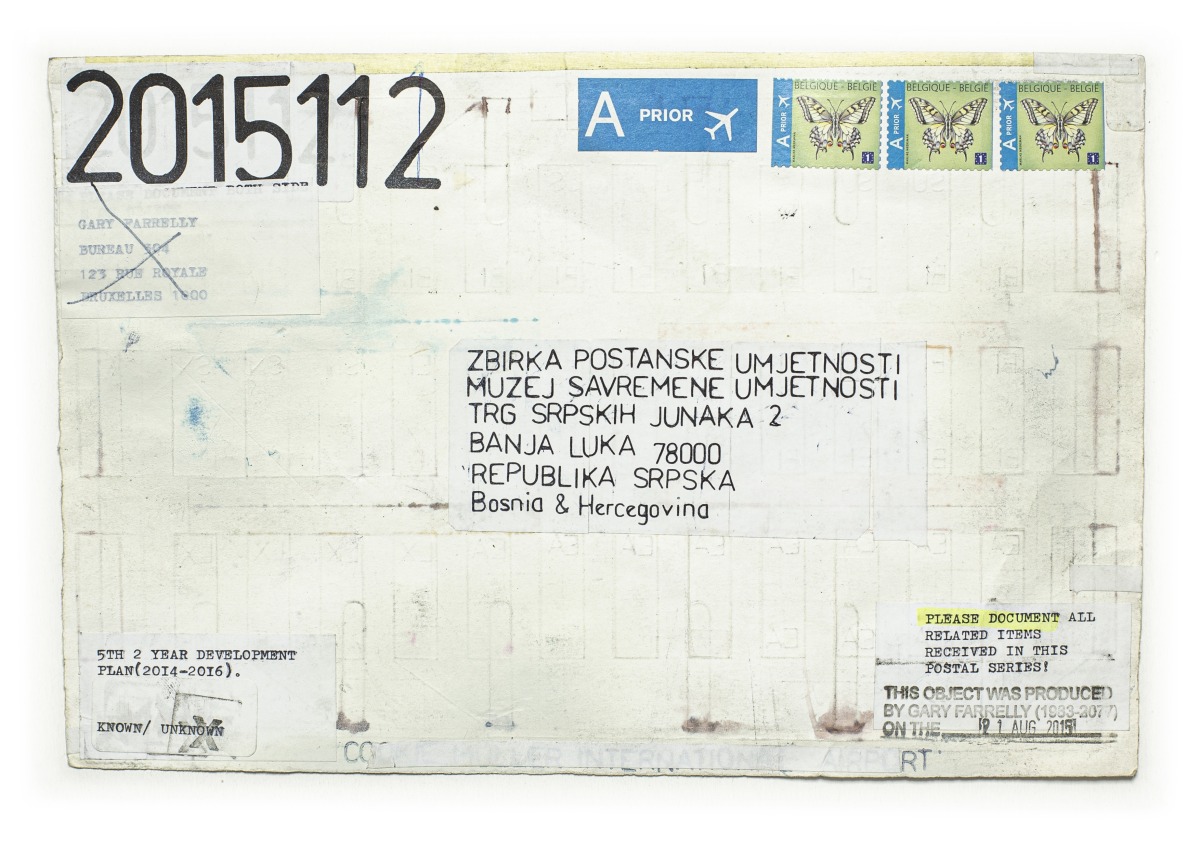 Dispatch 2015112 (2015) courtesy of the Museum of Contemporary Art of Republika Srpska.

Around the time I was taking a sabbatical from the physical manufacture of artworks, I was deep in the guts of a multi-annual film project called GLUE with my dear friend Oisin Byrne. We had both left Ireland a couple of years earlier, I went to Brussels, and he relocated to London. For over half a decade, the making of GLUE was the structure that kept us embedded in each other’s everyday lives. The final shape of GLUE was a semi-fictional concoction of my experiences of the sleep disorder narcolepsy told through manic and confessional monologues. The project was the first time I positioned my verbal and physical performativity as tip of the spear of my work. The public premier of GLUE was in Salzburger Kunstverein in the summer of 2018. 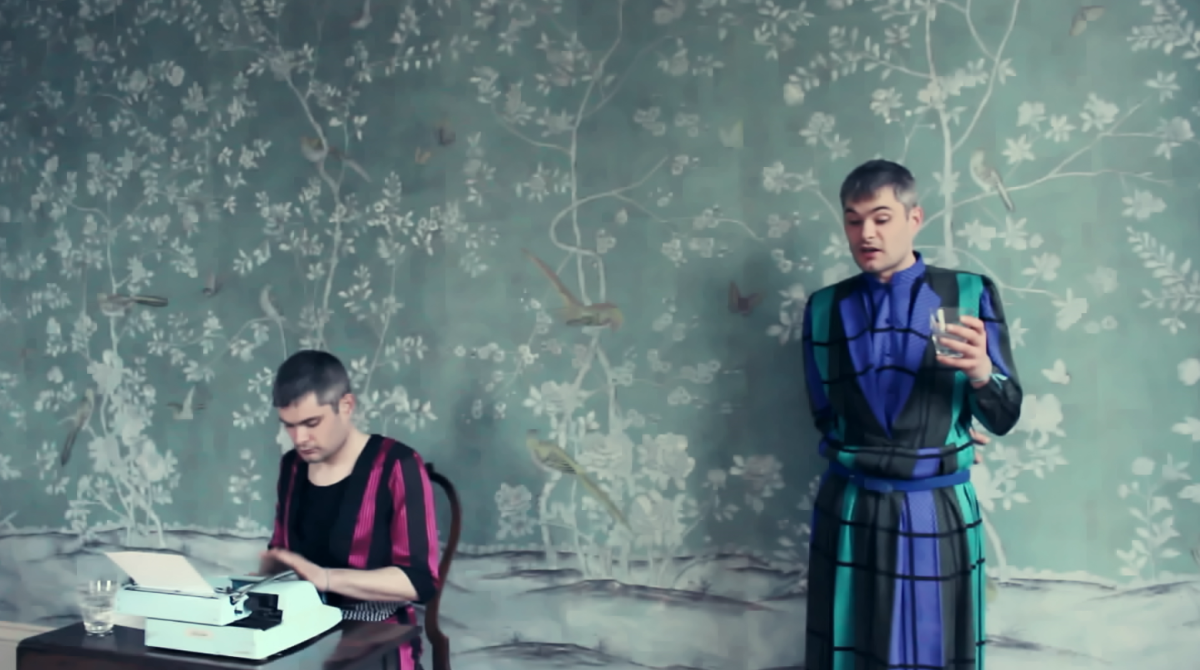 In January 2015, I met Berlin based photographer and sound artist Chris Dreier. We were introduced to each other over dinner in the Germany city of Wuppertal. Our first conversation was about Charleroi, the mangled capital of Belgium’s post-industrial rustbelt. Our alliance was instantaneous. Since then, we have been sending each other weekly postcard briefings obsessively focused on our shared interests in corporate architecture, finance, disasters, institutions, political assassinations and magic. From the beginning, we always understood the correspondence as a receptacle for some shared knowledge we were both trying to capture. On October 3rd, 2015 we codified our relationship into an institution and established the Office for Joint Administrative Intelligence O.J.A.I.. 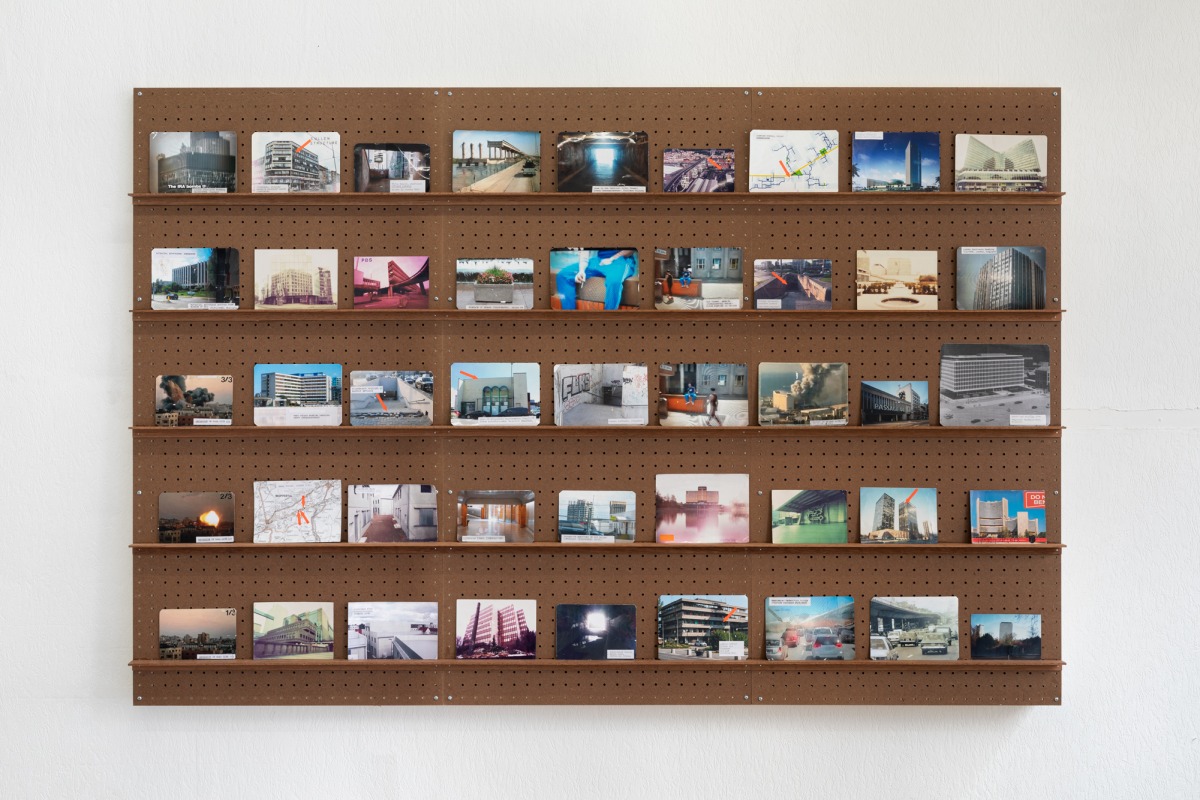 Office for joint Administrative intelligence is configured as a DIY para-intelligence agency operating between Brussels and Berlin. I would describe our process as having some research components, in that we gather knowledge based on hyper-specific fields of enquiry – pedestrian tunnels, market shocks, plane crashes, dried up fountains, lonely office blocks, pornography staged in modernist architecture and public announcements (over Tanoy). The research component is not an end in itself. We use the information mined from economic, political and architectural sources as a departure point for uncanny speculation and highly subjective fiction making. 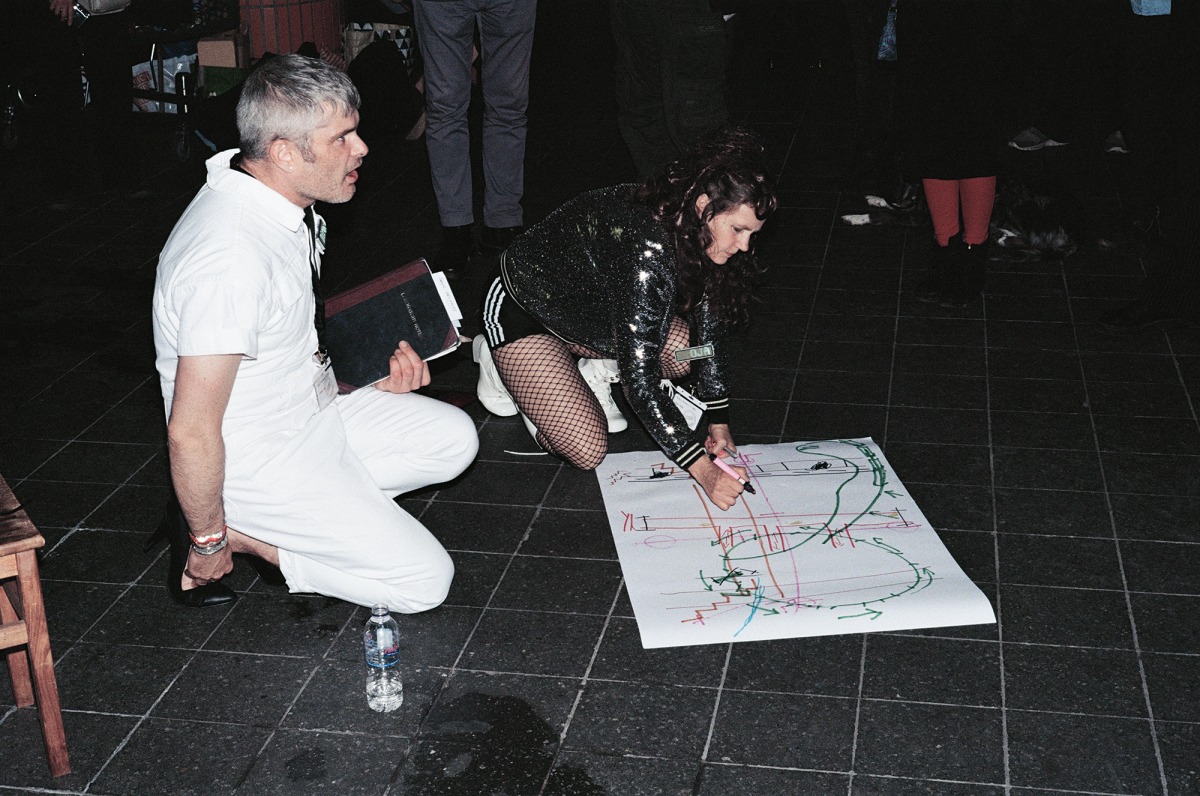 In 2021, I enrolled at a.pass in Brussels, an artistic research environment coalesced around performativity and scenography. My project, in close cooperation with the office, departed from the work of deceased American conservative conspiracy theorist William Milton Cooper. Cooper’s work was a precursor to QAnon and encountered the public through the polemical Hour Of The Time radio show which synthesized economic and political ‘research’, occult knowledge, personal grievance, and manic episodes into a paranoid tsunami designed to undermine public confidence in institutions.

During my time at a.pass, I developed various performative versions of myself as an agent for disinformation, including: the bureaucrat, the crossdresser, the seducer, the charlatan, the guide, the joker, the devil’s advocate, the instructor and the Cassandra. 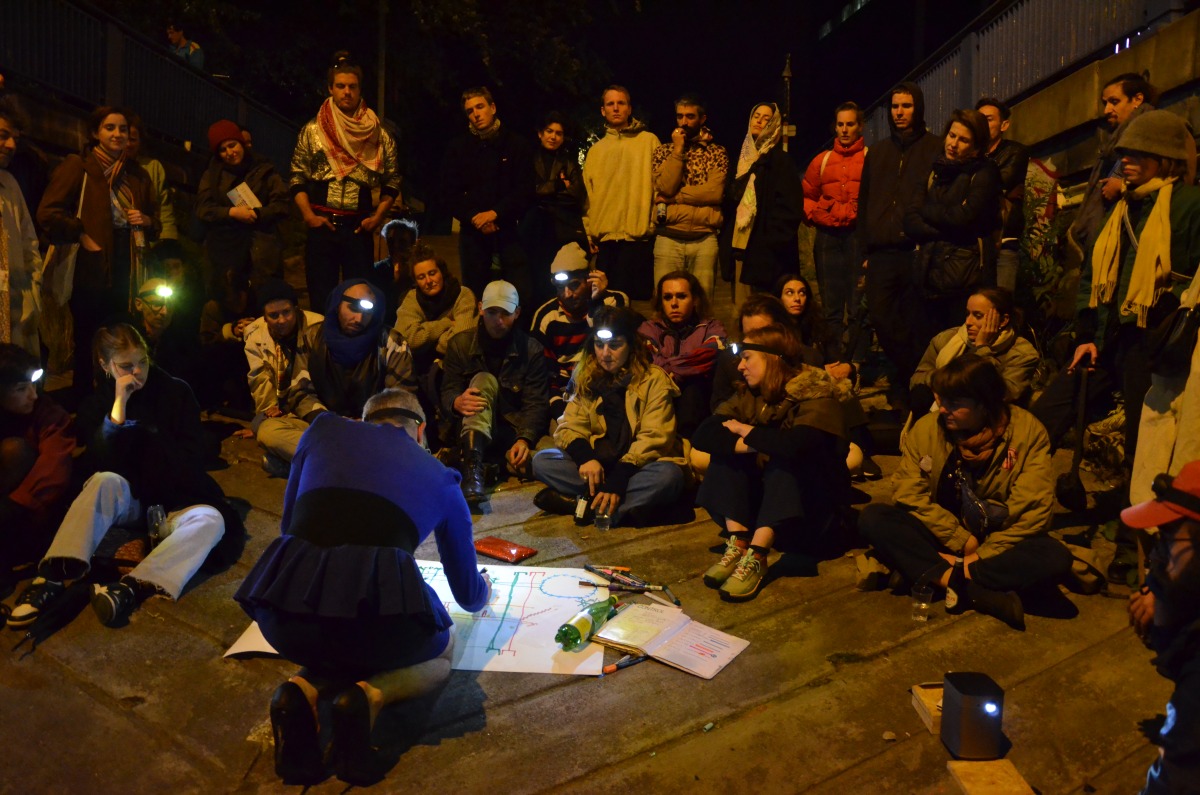 My current exhibition Proximity Papers – new works from an organisational self – is my first solo exhibition since 2015 and my first major project outside the office in as many years. On the curatorial initiative of Various Artists, the show signals a reignition of my attraction to slow and repetitive processes of hand manufacture such as stitching, stencilling, typing, folding, labelling and redacting. Channeling the same set of political and architectural imaginaries that inhabit the more bombastic performance work, the pieces in the show are encoded with systemic fictions, self-referencing data, geographical imaginaries and lots of modernist ghosts. 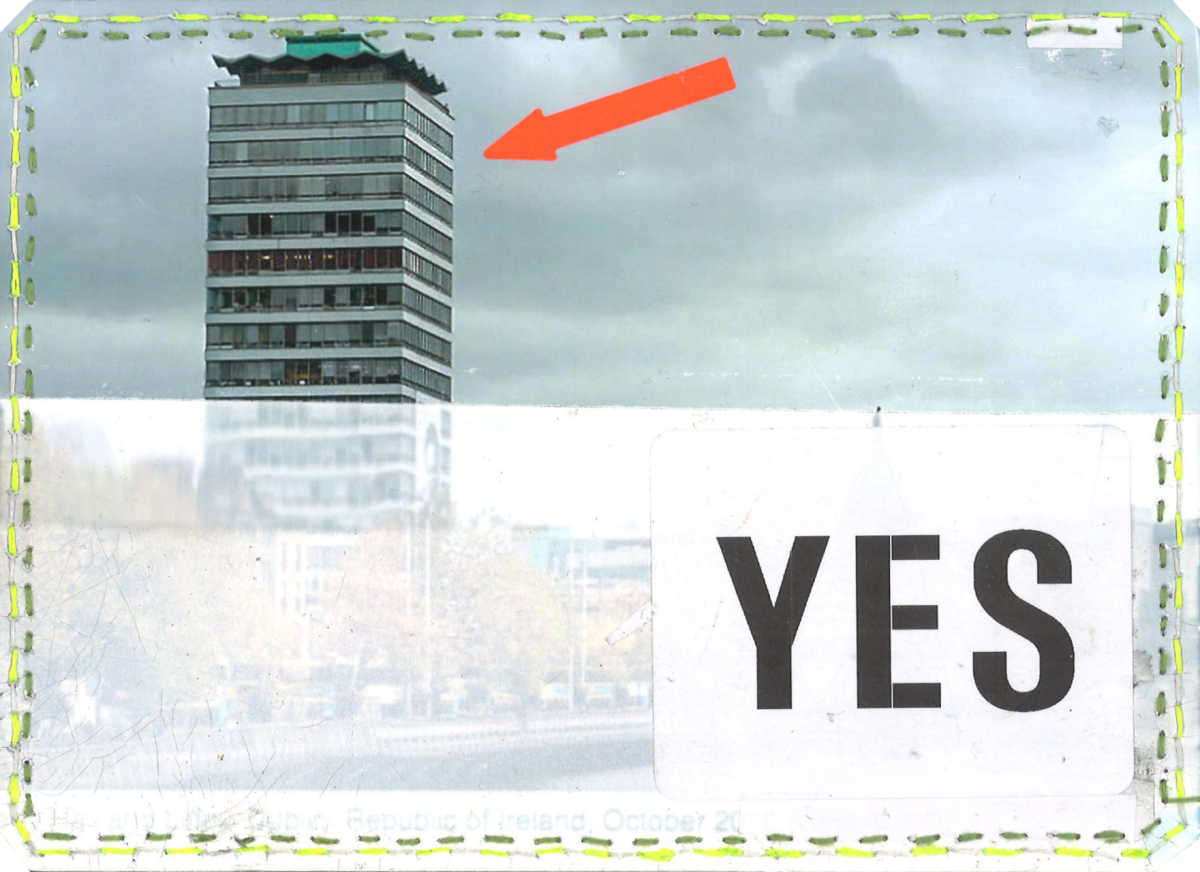 My starting point was a series of postcards that I made for the Project Arts Centre BAE publication a couple of years back. They depict Dublin’s most iconic modernist office blocks: Liberty Hall, the civic offices, Apollo House, the Irish Life Centre etc. These were the first buildings I ever loved.

I have always been perversely attracted to the unequivocal, disciplinarian presence of post-war buildings in cities. Even as a kid, I knew that these erections were encoded at a genetic level with simultaneously seductive and coercive political instructions. Buildings are dangerous. I have spent my adult life pondering the question: what subliminal messages are these structures asserting into the public space? What do the buildings want? 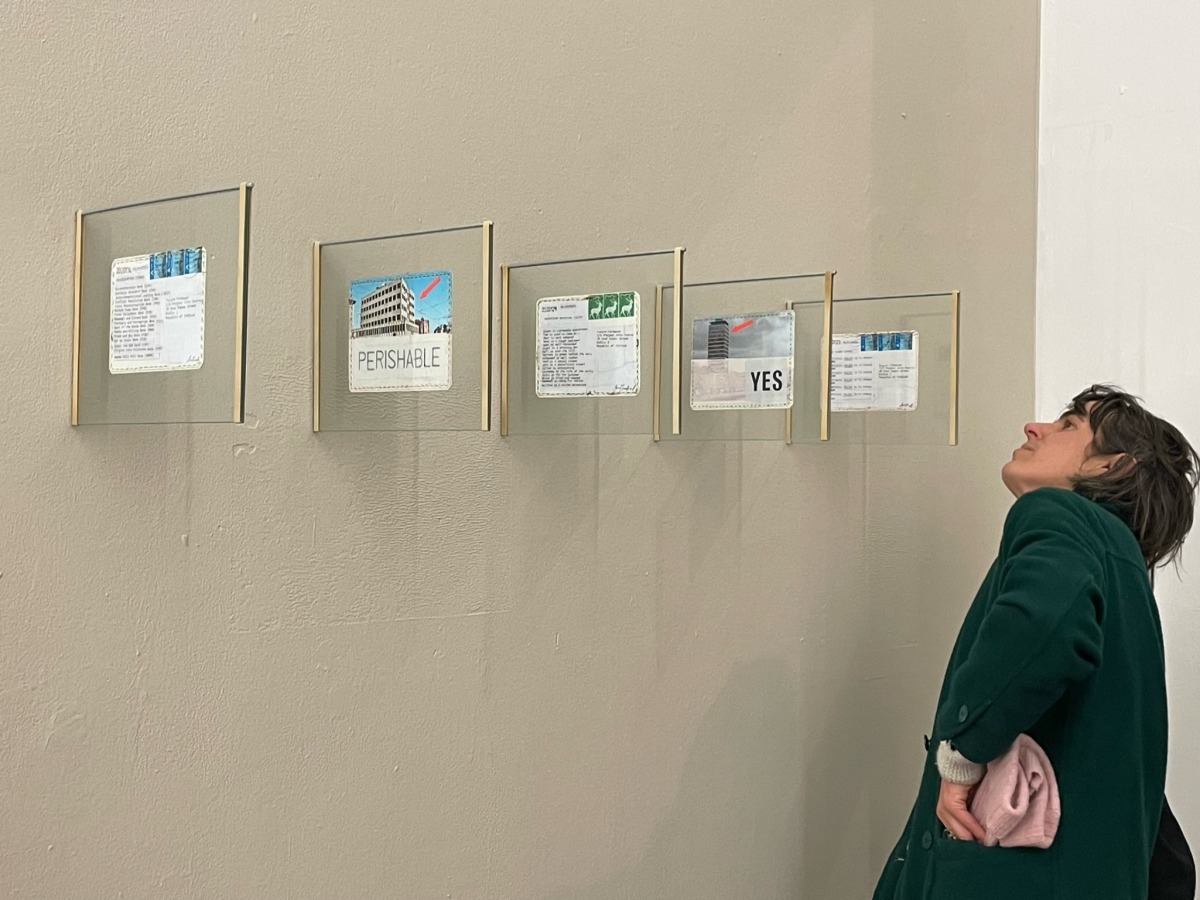 Most of the materials in the show were subjected to prolonged direct physical contact with my body. I carried the A4 drawings folded up in my pocket for prolonged periods, larger works were digested at the bottom of my tote bag or flattened under my mattress. I took the two main pieces of the show – a set of watercolour election result maps – into the shower with me every day for a month, carefully bleaching the constituency areas to simulate transitions of power. These processes were extremely destructive to the integrity of the materials and at some stage the works risked disintegration. The second set of processes consisted of repairing, restoring and devoting care to the surfaces. Bringing them back from the dead. 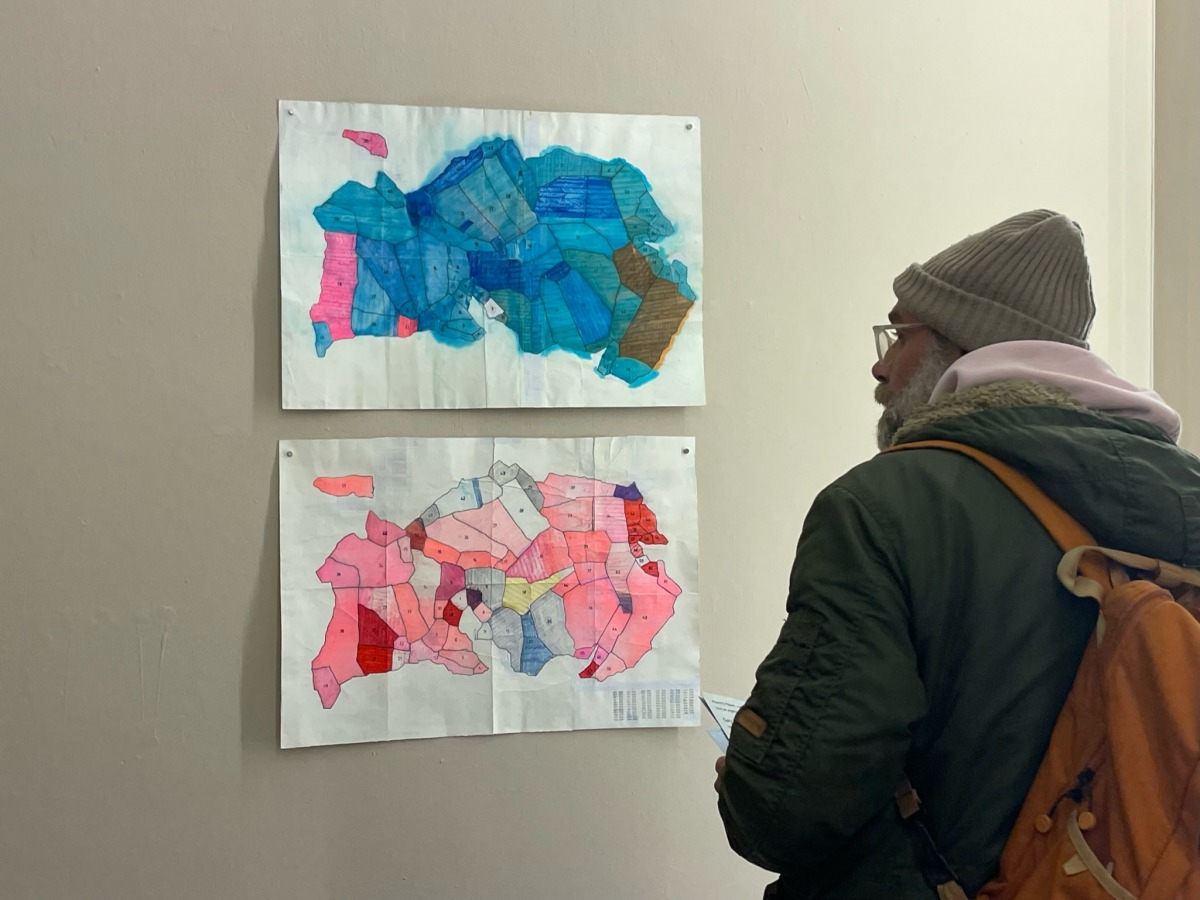 The work is characterised by a jaded bureaucratic, architectural sensibility. Some of the works consist of repetitive text piled up to look like tower blocks ‘IT IS OFFICIAL POLICY TO APPEAR UNMOVED’.

The word ‘YES’ is recurring throughout the show, part act of self-encouragement/partially ironic. All the works are stamped on the rear with my name, date of birth and projected expiry date- Gary Farrelly (1983-2077). I will be ninety-six-years-old if the prediction is accurate. Specially constructed display units were designed and built by Remy vanderhaegen. The show was executed with the generous support of The Arts Council and Fingal Arts Office. Sincere thanks to Various, Phyllis, An and Loes and Remy vanderhaegen. 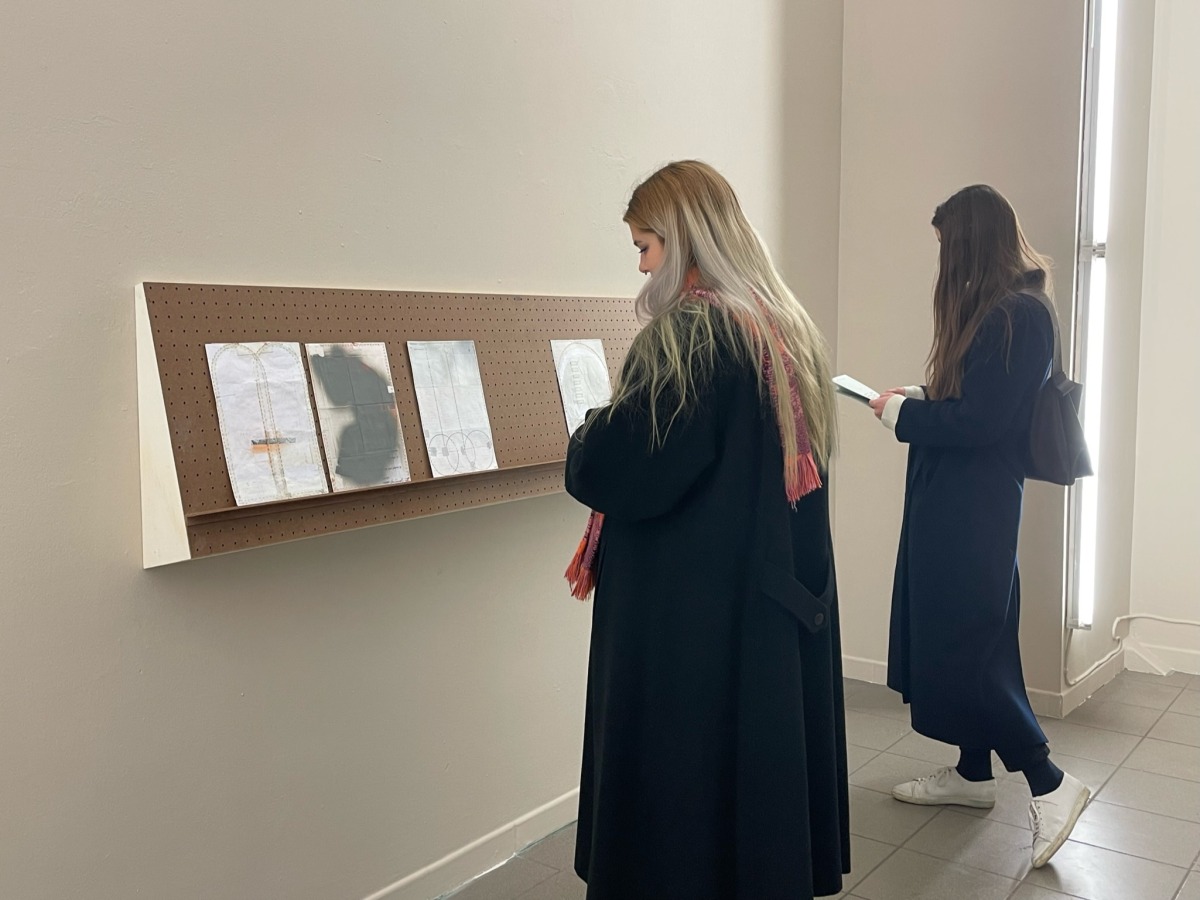 Proximity Paper is on view at Nadine/NOdine Laboratory for Contemporary Art at 105 Rue de Laeken, Brussels 1000 until December 8th: https://index.nadine.be/proximity-papers-new-works-from-an-organisational-self/

Gary’s work is part of the group show ‘Why Be An Artist’ on show at NCAD gallery in Dublin from December 1 2022 to February 15, 2023: https://www.ncad.ie/gallery-event/view/why-be-an-artist

Gary Farrelly (IE) is an Irish visual artist and educator based in Brussels researching on infrastructure, bureaucracy and the architectures of power. In recent years, the main manifestation of his practice is a bilateral duo called Office for Joint Administrative Intelligence. Farrelly studied at NCAD in Dublin and later LUCA School of Arts and a.pass in Brussels.  Exhibitions and performances of Farrelly’s work both solo and collaborative have been presented by Goldsmiths Center for Contemporary Art (London), Marres Centre for Contemporary culture (Maastricht), Contemporary Art Center (Cincinnati), Centre Wallonie-Bruxelles (Paris), Grölle Pass projects (Wuppertal), Damien & The Love Guru (Brussels) and Salzburger Kunstverein. He is a lecturer at La Cambre ENSAV in Brussels and his work is supported by the Arts Council of Ireland and Fingal Arts Office.