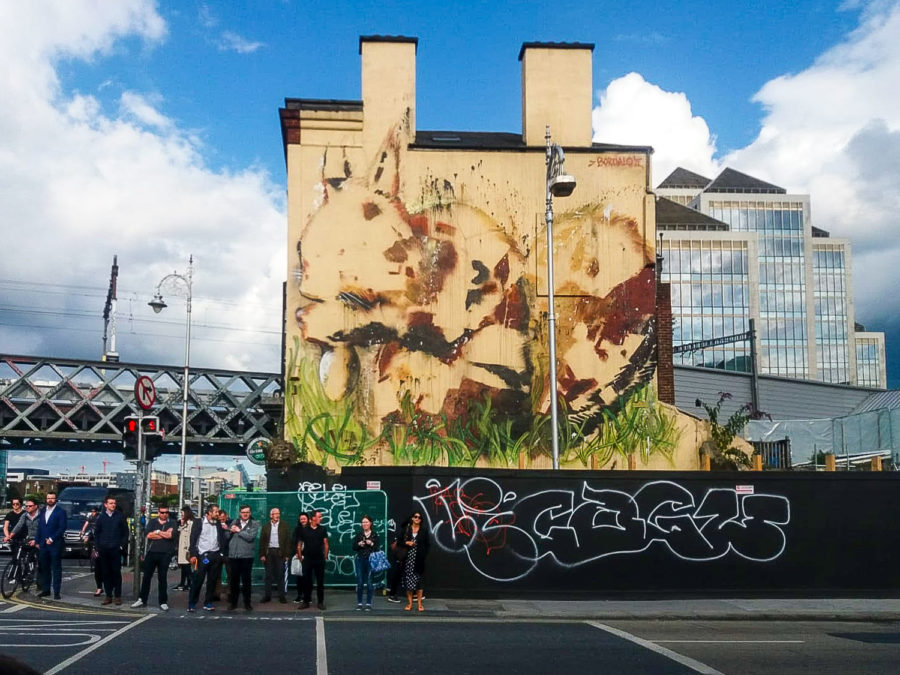 Artist of the Month: Bordalo II

The Dublin Red Squirrel was taken down last week. I’m not mad about that as I’m the first one to say that my work is ephemeral, just like everything in life. I also incentivate [sic] progress, rebuilding when necessary, the use of dead areas of towns to make something better, the rehabilitation of the abandoned to give a new life to the city, definitely that’s the right way if it respects the environment and the local culture.

I’m just sad that that company didn’t keep their word and didn’t wait until Tuesday as had been agreed, because we were making a special plan try to move the piece to a new location and document all the process.

That was the Portuguese artist Bordalo II’s reaction to the removal of his installation from Tara Street, Dublin: a massive red squirrel on the window-less side of walls next to Tara Street DART Station. The simple and predictable reason for this sad amputation is the building of a new hotel on the same site.

The Red Squirrel is part of a series call ‘Trash animals’ spread over twenty-four countries. These are intriguing and provocative installations of endangered species, constructed from discarded products; scrap we don’t need any more, but which are destined to last forever, and contribute to the extinction of these animals.

Damaged bumpers, burnt garbage cans, and discarded tyres are among the materials that stimulated the artist’s inventiveness. He has transformed these into the shapes of a fox, an ostrich, a stork, a bear, a possum, a racoon, and a lemur. Whether walking through Paris, Los Angeles or Pattaya, it’s better you don’t know when you are going to come across one of these.

You are greeted by massive, curious creatures: first their vibrant colours from huge murals; after that you make out the ropes and chicken wire used to fabricate hair, the bicycle frames used for bodies, the ball bearings for eyes, and then the appliances and plastic fencing shaping their expressions.

Bordal II began his career as a graffiti artist, but as he matured, felt a need to express his disgust with the environmental problems of our time. He was inspired, and challenged, by the classical art world, in particular that of his grandfather, Real Bordalo. This brought out new creative processes – active, laborious, and multi-technical – what he calls ‘free-style.’

The Dublin Red Squirrel project was developed in collaboration with filmmakers Trevor Whelan and Rua Megan, who filmed Bordalo II for two years, bringing him to Dublin, creating with the producer Glenn Collins memorable footage of his installations around Europe in an acclaimed short movie called: ‘Bordalo II: A Life of Waste.’

Bordalo II chose the red squirrel for Ireland as the animal has been under serious threat of extinction from deforestation and a virus carried by the non-indigenous grey squirrel.

The piece sends out an acute message, drawing attention to our wastefulness. Forming a creative dialogue with the city and its people, it became a much-loved and effective public art work.

On August 6th of this year, however, employees of Ronan Group Real Estate, or agents on their behalf, who are reconstructing the building, removed the installation, without warning, and despite a meeting with the filmmakers and the artist, where it had been agreed that they would film the demolition on an agreed date.

Bordalo II’s sculpture is a masterpiece of its kind, depicting an ongoing environmental crisis. It begs the question as to whether an art work such as this is really ephemeral, when the public take it into their hearts. Is a sculpture simply rubble and rubbish that can be disposed of at the whim of a builder, without considering the artist or those who appreciate it?

I wonder was this allowed to happen simply because no institution owned or funded it. Is it simply that patrons of the arts are only interested in the old masters and expressions of individual nations, allowing developers to demolish our contemporary inspirations?

Published in Articles and Arts