Picture this scene. Next to a Martello tower, a grimy concrete shelter below which a motley crew, ranging from whooping lads to fragile ladies, make their way, often daily, into the ocean at Seapoint, Dublin. Some swim significant distances – measured in buoys and other landmarks – others simply ‘take the waters’. There are New Irish here, while native Dubliners mix easily with country friends, in the collective gasp before wading in.

I have visited the sea most days so far this winter. It is the dread of the cold, not the cold itself that holds the most fear. Once enclosed by the water my limbs thrash a course, and I am no longer conscious of the temperature. That is as long as I go in every day. If I leave it for any length, the cold will sting, even in the summer months.

Is this a sport I wonder? There is no zero sum game of winners and losers. No match reports. No fandom. But there is conviviality, life affirmation, fitness and even a boost to the immune system I have been told. But something deeper motivates my immersions, and any health benefits are tangential.

I am dreading the months of January, February and March. It is hard to contemplate temperatures that will have dropped a further three or four degrees to eight degrees.[i] Remarkably, the average sea temperatures in December is higher than in May, when the difference between air and water could be fifteen degrees. This month the water is often warmer than the air, although you lose heat a lot quicker without your clothes on.

Also this month the solstice coincides with a full moon. I have no idea if this has a symbolic significance. What I do know is that swimming with a crowd during a full moon is great craic. I have attended these lantern-lit gatherings for the past two months, and am hoping to brave it again on the 21st. One trick to stave off hypothermia is to bring along a hot water bottle to pour over extremities afterwards, making sure to avoid giving yourself a scalding. 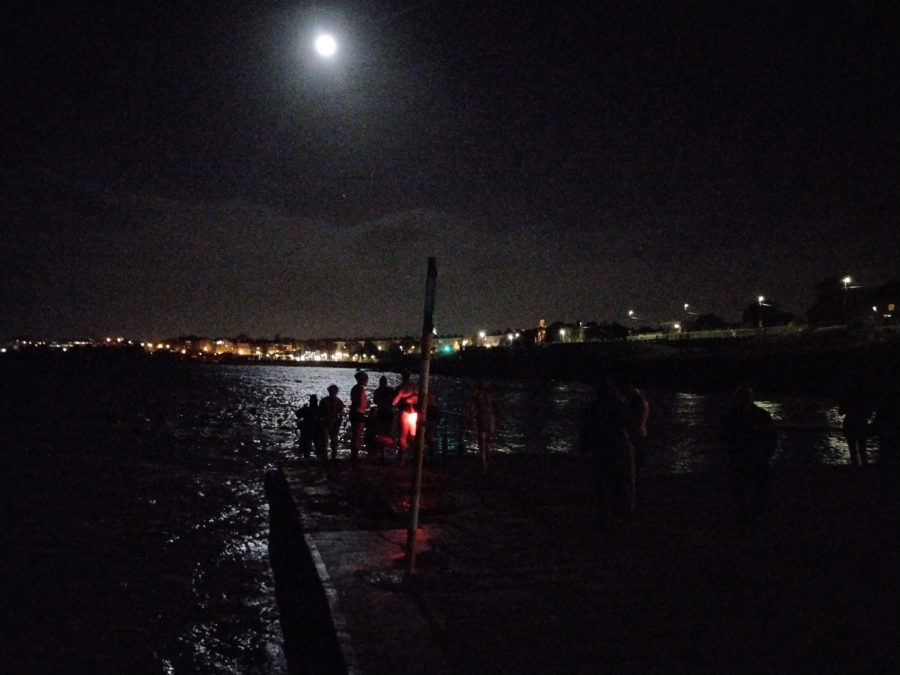 I have just started wearing protective gloves – which I found on the street – into the water. It makes quite a difference to my hands on the twenty-five minute cycle home. I am thinking of acquiring booties that I see other people wear, but that would involve a financial investment in this lowest maintenance of sports. Really all you need are togs, towel and a good dollop of madness. 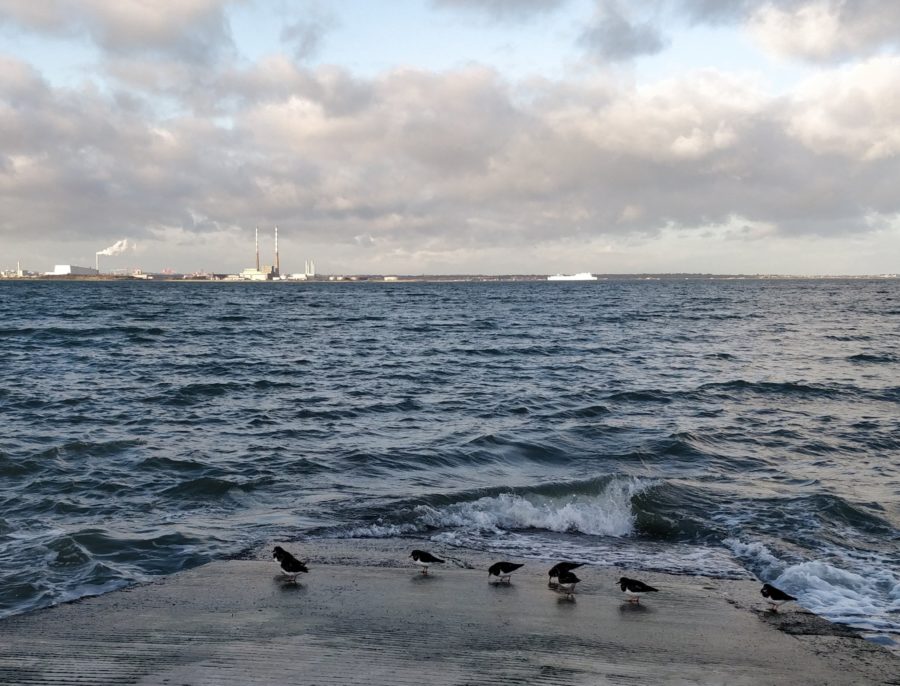 I take pleasure in seeing an array of birdlife by the seashore: there are the usual suspects of gulls and cormorants – which I now see are colonising the River Dodder near where I live as fish numbers decline in the sea – but also Brent Geese along with Waders some of which make their way from Iceland, so I guess they find our waters positively balmy! It is shocking to hear that shards of plastic are affecting these migrants’ welfare.[ii]

Most days I take a picture from the same spot overlooking the Poolbeg stacks. I do wonder about posting these on social media, but I have available to me the superb technology of a telephone, which takes fine pictures of sky, sea and land converging. Obviously in the process I am selling the platform of an irresponsible multinational, but cannot the same be said of any author whose book is on display in a chain store? I just want to convey the beauty of my city and its hinterland, and how we should treasure the wildlife, and examine carefully issues like the emissions coming from that eerie incinerator by the stacks.

This summer my mother died. Losing a parent is generally a seismic life experience. I think my dedication to the swimming has had something to do with that. Cycling to and from Seapoint I pass by places I associate with her. It is sad, but I don’t want to avoid it.

When my mother went into a hospice I immediately returned from the UK where I had been working. The following day she said: ‘don’t let me stop you from going for a swim’, much to our amusement. Two days later she passed away.

The other landmark near where I swim is Dun Laoghaire pier. It is so much a part of the geography of this place that it seems timeless, but it was built on the initiative of a private citizen, Richard Toucher, a Norwegian sailor who settled in Dublin, passing away in 1841. He provided, at great personal expense, most of the granite for the building of the harbour. This philanthropic enterprise saved many lives, and now provides a bit of shelter as we swim at Seapoint, where it can still get quite choppy.

This is an extract from one of his letters:

I write not for fame, but for utility. It is my aim rather to be understood than admired. To elegance of composition I aspire not. But I have some nautical experience…and…the idea of an Asylum Port at Dunleary is ever first in my thoughts.

The Merchants, Ship Owners and Ship-Masters of Whitehaven, Workington, Maryport, Harrington and Parton, are also preparing a petition to be presented to His Grace The Duke of Richmond, praying his aid and support for the erection of this much wanted pier at Dunleary. This I am not astonished at, when I reflect how many of their relatives have been lost on the coast of our Bay, the numbers of widows and fatherless children that are left to bemoan that this pier had not long since been built, which would have saved to them what was in this life most valuable.

For his troubles Richard Toucher died a bankrupt.[iii] We recall his great legacy today, this Cassandra Voice, who devoted his fortune to the continuing benefit of others.

Did you know that Cassandra Voices has just published a print annual containing our best articles, stories, poems and photography from 2018? It’s a big book! To find out where you can purchase it, or order it, email [email protected] 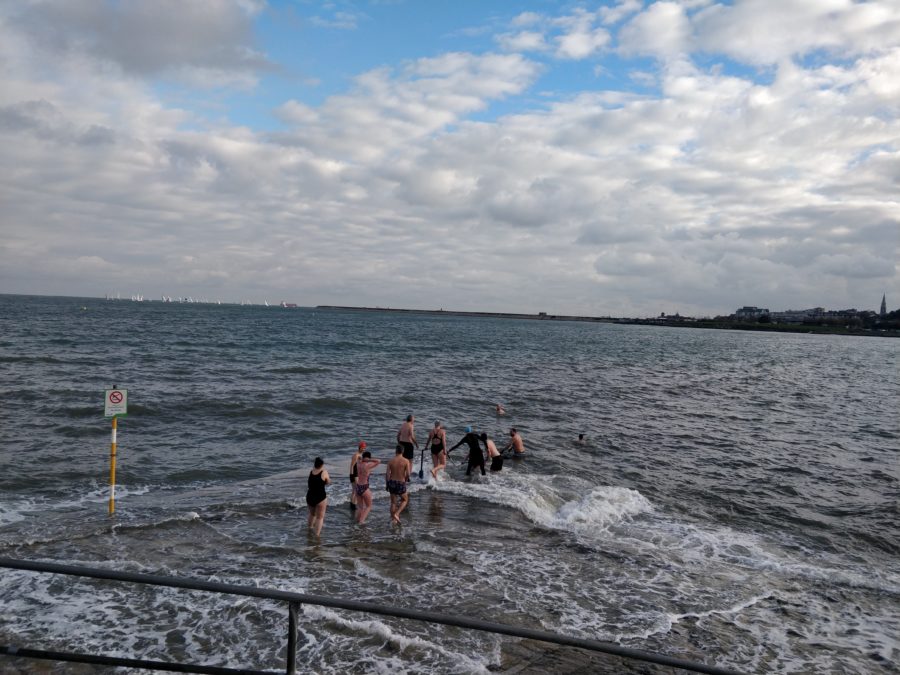