It was about one in the afternoon by the time I reached 23 Prussia street. Earlier in the day I had received a group text saying: ‘Illegal eviction, Help Needed’!

By then a human wall had formed outside the front door to Sunnyvale and the mood was upbeat. I was told the police had tried to break up the crowd but failed miserably. Instead some of them had been absorbed into the crowd, swamped by it. Now clinging to the wall, under the heat of both sun and crowd, they were sweating hard.

‘Illegal eviction’, cried a voice from the crowd.  A cheer rang out.

Another voice called out, this time singing: ‘Who protects landlords’?

As the singing continued, I asked around to find out what had happened. Everybody was telling the same story. 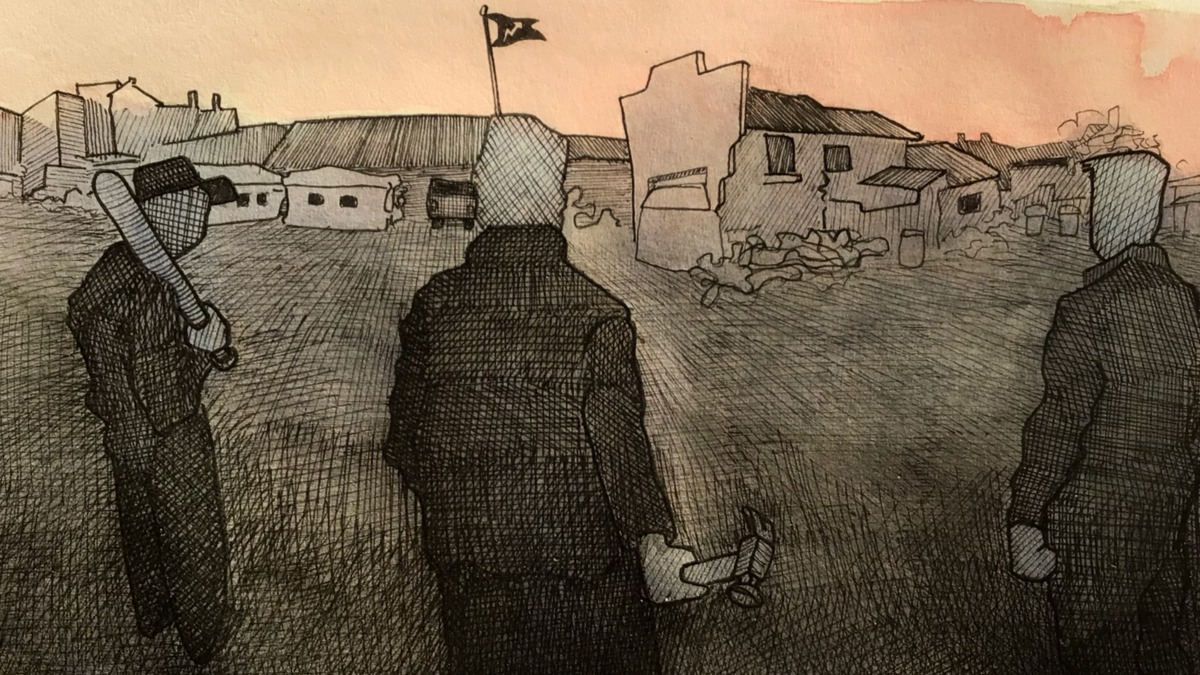 When they came, they came spitting flame, vitriol, and all sorts of hatred. No eviction notice for this one; no ‘please-fuck-off’ letter through the door; no legal nicities this time. Just a dozen thugs or so, swinging two-by-fours and crowbars: aiming for window and skull.

The sun had not yet risen when they arrived, cutting power in the dark, before stealthily scaling the back wall. Thieves in the night, and bailiffs come dawn – bollocks to the lot.

Sent by Paschal Donohoe’s former ministerial driver and Fine Gael constituency treasurer Martin Sadlier of the McGrath Group, these men were ‘just doing their job’. Yanking folk outta their homes and destroying whatever remained. It’s nothing new. The same job has been done for centuries.

After finishing with the residents and cutting the power, they had gone to work on the roofs, walls and plumbing. Making certain there was nothing left of the homes that were there before – sure it’s nice work if you can get it. 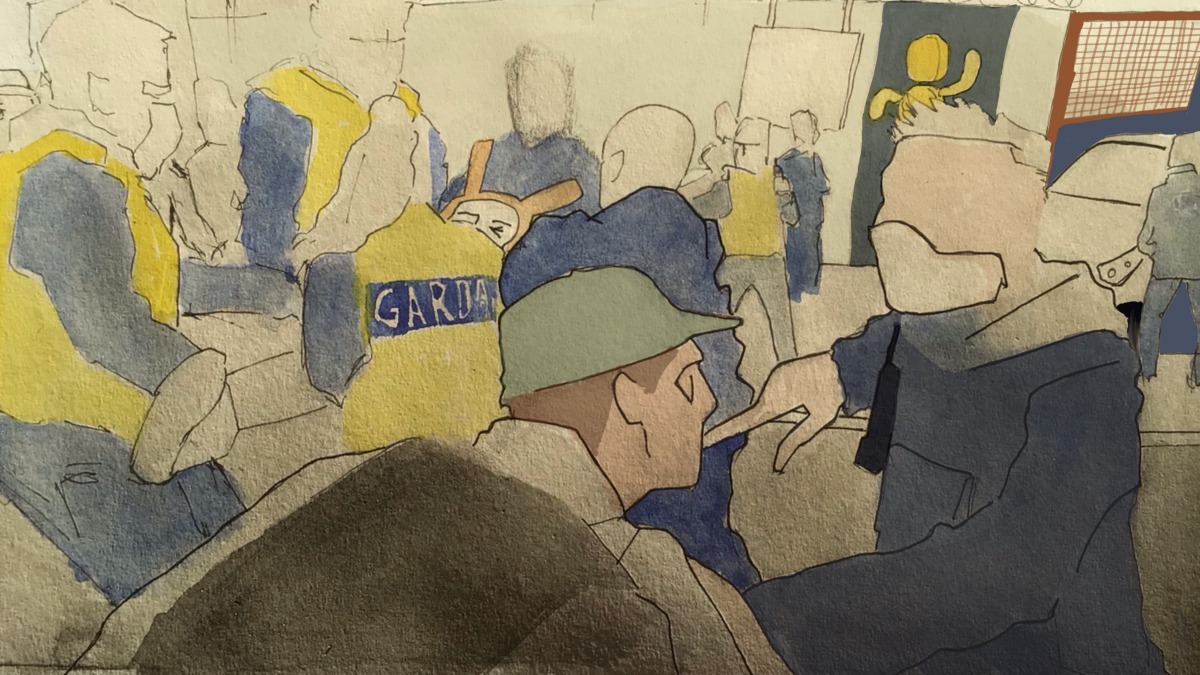 In front of me a Garda screams frantically, ‘Get back, GET BACK’!  Meanwhile other Gardaí are picking people up and throwing them aside. ‘Get off me, a young man screams, GET THE FUCK OFF ME!’

At that point I felt confused, as until then things had been relatively calm. The Gardaí had been allowed to get by the human barricade at the front door, which had by then moved in front of the back entrance.

The Gardaí had merely been observing until that point, standing around in groups of two and three. But I could see something was afoot, when they all clustered around the Garda who seemed to be in charge. After he gave the word, all eighteen of them turned back towards the crowd and started forcefully breaking it up.

‘GET BACK’, the Gardaí screamed, shoving people out of their way, ‘GET BACK’!

‘I’m just here to make sure nobody gets hurt’, responded a man that had just been shoved off his feet by the incandescent Gard.

‘I don’t know about that,’ said the man, brushing himself off, and gesturing to the surrounding melee.  ‘Yous have a reputation for reefing people out of it and breaking their arms. Know what I mean’? 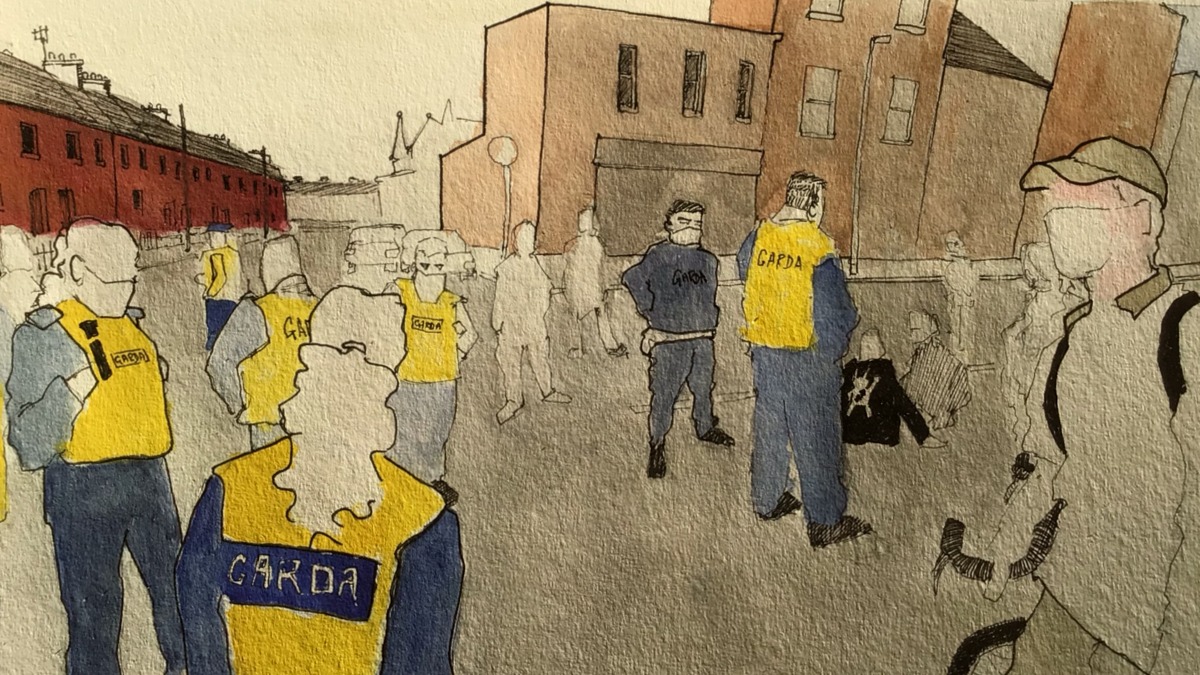 I was still trying to figure out why the Gardaí only decided at that point to break the crowd up. Then I noticed the back gate had been opened, and realised they were clearing a path; which hit me like a punch I should’ve seen coming. Instead I had walked straight into a door.

The Gardaí weren’t there to keep the peace, but to seize a landlord’s property. McGrath’s security men must have been getting hungry. I figured they were allowing the Gardaí take charge, knowing they had done their work for the day. Having smashed up the premises, they were now ready to leave.

On cue, two white builders’ vans rolled out, full up with them, state protection on either side, as Gardaí pushed back the throng of protesters trying to stop the vans from leaving. 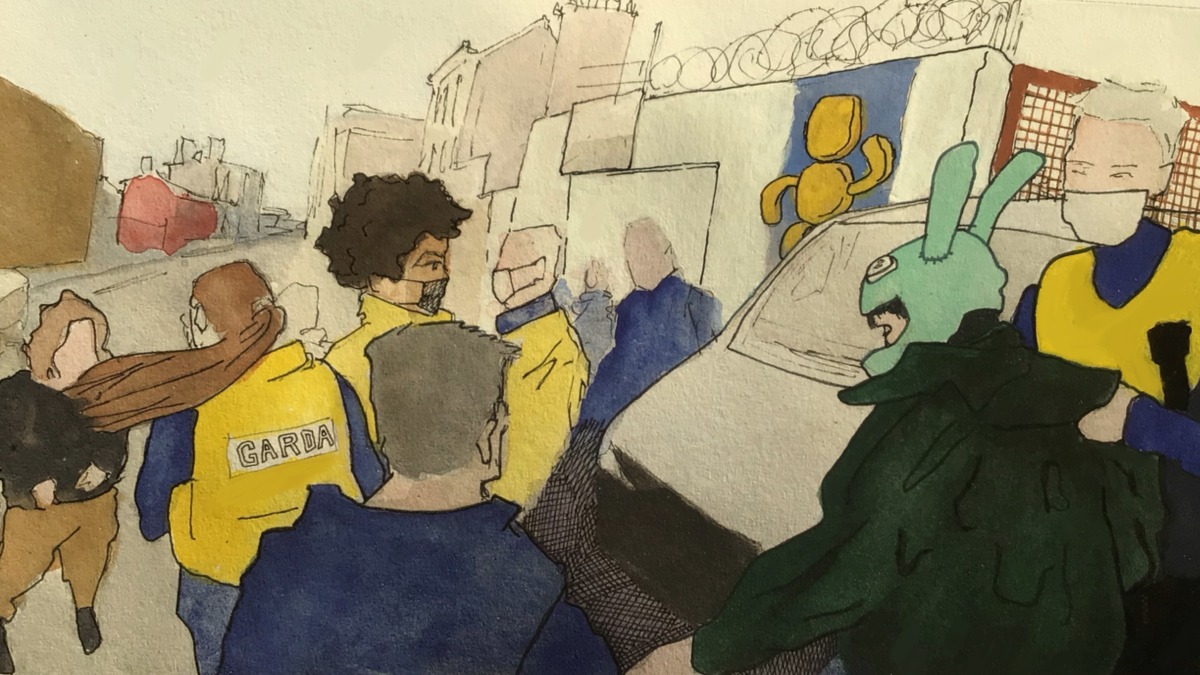 Yous assist evictions, know what I mean kicking people out of their homes, is that why you joined the Guards?

It’s a hard question to answer but that’s the truth isn’t it?

Illegal evictions, with thugs, smashing people up and all. Like I just think it’s tragic,know what I mean? And I think you do too, and you keep the mask up and you keep your arms crossed and you tuck them into your vest. Trying to keep up the facade that you don’t care… I just think it’s tragic.  And very easily you could have been in the same situation these people are in where they were without a home. Now they’re gettin reefed out of it… easily could’ve been any of yous.

It’s sad, you have jobs and you need your jobs to live.  But… I don’t think you thought this was what being in the Guards was gonna be. I mean you probably thought you were gonna be helping I’m sure, but you’re clearly not doing a service to the community. You’re doing a service to landlords and people who have been making millions and billions out of this crisis that we’ve been in for the last ten, fifteen, twenty years!  All you’re doing is helping that.

You can’t actually justify it, so you keep your mouth shut. You know back in the day, like a hundred years ago? When people were brought in to help evictions, they were socially ostracised. Know why? They were betraying their people, and everyone knew it. You’re working people right? Well, you’re betraying other working people. It’s as simple as that! 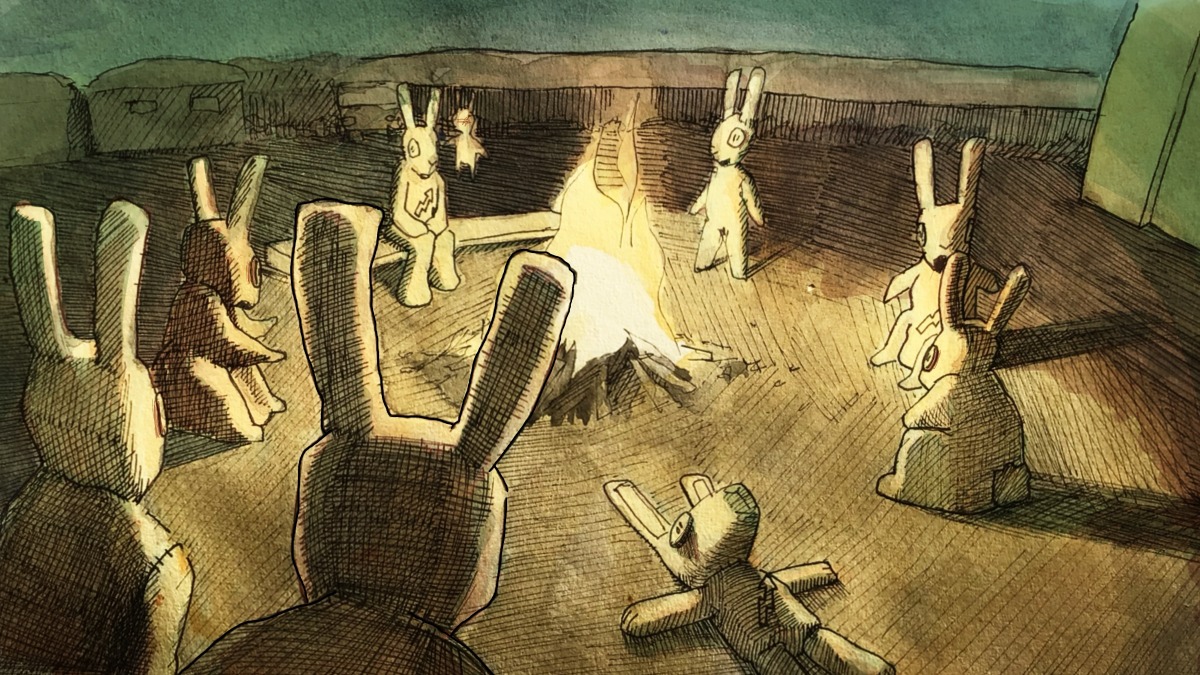 Once McGrath’s men were safely escorted off the premises the Gardaí also took their leave.  Their job was done. To take action against any illegal eviction that may have occurred was apparently not under their remit. They were there to protect the safety of the men who had reefed people out of their beds in the dark and thrown them out on the street. To protect McGrath’s men, who had smashed up a home out of spite.

Once they left the residents of Sunnyvale re-entered their now broken home. Oil had been thrown over all the surfaces, walls had been smashed, support beams destroyed … an horrific scene to behold. Nonetheless they persevered and began to clean up the mess. A community clean up was organised and the long road to recovery began. Of course, without resources it’s not an easy road to walk.

People sat around a fire that night talking over the day’s happenings. I didn’t make it myself, but imagine it felt good, despite all the shit.

Gareth graduated from NCAD with a degree in glass design in 2000. He now works in illustration with a focus on politics. He likes to work in both portraiture and city-scape to tell a story through line and movement. Recently he did a series with Candlelit tales illustrating Irish mythology for children in a series called Candle-little tales.