This year marks the 109th International Women’s Day. The now universally recognized date first bore fruit after a 1908 march, where 15,000 women in New York City demanded shorter working hours, better pay and the right to vote. Clara Zetkin, a German Marxist theorist, activist – and all-round badass – pioneered the idea at an International Conference of Working Women in Copenhagen: representing the power of female voices coming together.[1]

For this year’s occasion, I attended the Irish Writer’s Centre’s WomenXBorders event, promising motivational talks, and a platform for female writers to engage in a day-long readathon, where they would have the opportunity to showcase and read their own work from a platformed mic stand on top of the room.

The organisers’ mission was to ‘foster connections between women and encourage professional growth for writers across north and south.’ Also involved was Women Aloud NI, with many members travelling from all over the country.

The talk that most attracted me was: ‘Publishing with a Mission: the Story of Virago and later Champions of Women’s Voices.’ Emma Warnock, publisher at No Alibis Press, was interviewing Sarah Savitt, publisher of the female powerhouse that is Virago.

I arrived early and was brought upstairs with a fresh cup of coffee (my fourth of the day) and notebook tucked under one arm. The all-day readathon participants were taking a short break, with hungry writers and readers now picking at sandwiches and supportively hugging one another. The sun was smiling in through the centre’s big Georgian windows , heating the crowded room. A scattering of jackets, glasses and pens with marked paper were dotted among the chairs, as the crowd had by now settled into their day-long residency.

During the short interval, I nabbed a member of Women Aloud NI, a volunteer-run organization that brings women from different backgrounds together through the power of sharing words. A refreshing mixture of ethnicities and cultures was evident.

One lady I was speaking to was a Frenchie based in Antrim, one of the one-hundred-and-sixty-eight-strong memberships from all over the world, who are living in Northern Ireland. Members expressed a strong feeling of unity and mutual support, with everything from being published on the website’s blog, to receiving feedback on works-in-progress, to day-long events.

Ballymoney-based author Jane Talbot is the project manager and event coordinator of the organization. She said that Women Aloud NI is about “uniting each voice and creating a community. We’re adding to the cultural life of this country, but how many readers know about all the women writers in Northern Ireland?”[2] Another member reminded me “It’s in the name. We want female voices to be heard – loudly!”

After that the final part of the readathon commenced. Writers and poets performed with passion, depth and unapologetic wit, absorbing the attention of the entire room before a timer would politely ring, keeping them within three minute slots.

Afterwards, people shuffled away from their seats once again, and I snatched an early place for the closing talk of the day with Sarah Savitt.

According to the event page, the talk would be framed around two crucial questions: first, was around the social, political and financial climate that impelled Dame Carmen Callil to set up Virago Publishing, the first mass-market dedicated publisher for 52% of the population – women in 1973; and, secondly, with statistics showing that male writers remain over-represented whether print publishing continues to have a gender issue.

Sarah tackled the story of the publishing house first. She defined Virago as feminist history makers within the literary landscape.

Australian born founder Carmen Callil was an active force in the feminist movement. The second wave of feminism was in full force, with the Equal Pay Act having been passed in 1970. The same year witnessed Kate Millet’s Sexual Politics, published by Doubleday and Co; while the first Women’s Studies department opened its doors in San Diego State University, followed shortly by a Women’s Studies program at Cornell.

There followed the publication of Sisterhood Is Powerful: An Anthology of Writings From the Women’s Liberation Movement, which gathered many prominent feminists’ essays into a seminal volume. By 1973, there was a palpable need for greater representation of female voices.

The plan was to create an openly capitalist enterprise aimed at a broad audience. As Sarah put it: “from the margins but never marginalized. Carmen ran a tight shift – even the tea towels were washed at a specific time each day. It was important for the house to be taken seriously and more so, for the writing to appeal to the masses.”

She continued: “The primal focus was not simply to publish radically feminist work. Instead, it was about generating a wide audience for female writers who were tackling subjects and genres of every kind – from fantasy to forgotten about classics to erotica. The focal point of committing to publishing women was the radical act in itself. Even better, publishing work that would appeal to masses meant greater profit and importantly, making competitive money for the authors.”

Sarah fondly recalled how, after the first year in business, people were asking the house: “do you have enough books to publish next year?” Yes, they did. There were plenty of female voices waiting to be read.

Until 1978 Virago focused mainly on non-fiction works. As the house grew, so too did its range. Publishing overlooked classics was, and still is important, especially those that had gone out of print.

The Secret Garden by Frances Hodgson Burnett and The Ghost Stories of Edith Wharton are recent examples revived by the imprint.

Looking back on its early days, Sarah shared how the current boss of Virago, Lennie Goodings considers the rapid success of the company as unsurprising since,  “women wanted to see themselves on a page.”

As the political landscape changed, the publishing world adapted. Now, the imprint only accepts submissions from agents. Crucially, it changed from its own publishing house to an imprint, having been bought by Little, Brown in 1995. But the core beliefs and mission statement endure.

Notwithstanding a long record of success, commercial doubts linger around work by female authors. Sarah said that even Michelle Obama’s autobiography becoming a New York Times bestseller, and which bookshops struggled to satisfy demand for, met the doubts of industry executives as to its mass appeal.

Similarly, their publication of A Girl is a Half-Formed Thing by Eimear McBride had been turned down sixty times before it arrived at their door, after which it enjoyed great success.

Addressing the second question of the day – whether an imprint that exclusively published female authors remains a necessity –  Sarah refers to a damning statistic. Currently in the UK, every CEO of every publishing house is a white male.

In 2017, Narrow The Gap published a report demonstrating that women writers make 89 cents to the dollar men earn doing the same job.[3] Annually, that makes up a difference of $6,552. Yet The Bookseller published a report showing women dominated the literary bestseller list for 2017, with Margaret Atwood, Sarah Perry, Elena Ferrante, Helen Dunmore, Arundhati Roy, Ali Smith, Zadie Smith, Naomi Alderman and Maggie O’Farrell all in the top ten. Indeed, the only male author on its list was Haruki Murakami.[4]

In response some female authors are calling for a response in a way similar to the #MeToo phenomenon. In Ireland ‘Wake Up Irish Poetry’[5] is an open letter addressed to the Department of Culture, Heritage and the Gaeltacht and the Arts Council calling for acceptable standards of ethics and governance in the Irish arts sector.

In response to the talk, the room was alight with passion, with Women Aloud NI attendees responding that Northern writing was especially male-dominated. They also referred to an insulting campaign by PSNI to ‘encourage female officers to nominate male officers to help them in their careers.’ 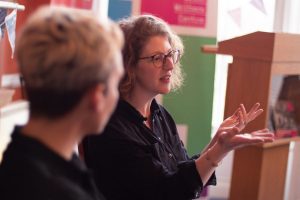 Meeting with Sarah, after what must have been an exhausting day representing the imprint, she exuded the same energy and enthusiasm. I asked what she would love to see come through her letterbox in 2020, and in the years to come.

She said she believes writers tend to have a sixth sense about these things, but that it felt imperative for her to put out work from underrepresented groups. So she is interested in writing from those living with, and writing about disabilities, and from perspectives informed by maternal mental health, the female body, stem cell technology, and menopause.

Significantly, she stated that if more of those unrepresented voices are heard, it gives greater freedom to those few currently writing from that perspective, who may currently feel an obligation to represent that position.

Finally, self-servingly, I asked for her advice on how a so-far unpublished female novelist should go about submitting a book for publication. Her answer was wise and thoughtful:

It was a hopeful closing to an important day. Tellingly, my own editor informed me that a disproportionate number of submissions coming through to him are from males. So let’s do our part; write our story, no matter how radical or not-so-radical it seems, keep submitting, and keep writing.

Sarah Hamilton holds a First Class Honors MA in Creative Writing with University College Dublin. Here, she was taught by worthy writers such as Frank McGuinness and Carlo Gebler. She then moved to Spain to teach English and focus on short stories. Now, she is living in Dublin and working on a debut novel. She volunteers her time as a telephone counselor with the DRCC and as a creative writing tutor with Fighting Words. Publications can be found with Pilcrow and Dagger, The Oval, and as a returning writer with Cassandra Voices.