The idea of home is a recurring Irish preoccupation – níl aon tinteán mar do thinteán féin.[i] This can be traced to a history of Famine dispossession, and a subsequent Land War. The Irish Constitution still commits the State to supporting women as home-makers.[ii]

It perhaps explains the vehemence of recent criticism, from across the political spectrum, directed at the Fingal Battalion Direct Action for protesting outside private residences of government ministers Simon Harris, Richard Bruton and Paschal Donohoe, as well as Taoiseach Leo Varadkar.

Social Democrat councillor Gary Gannon condemned the campaign as ‘entirely wrong’[iii]; while the Irish Times also weighed in, likening the protests to interventions at hospitals and medical clinics by anti-abortion groups.[iv]

While in the UK the sight of politicians’ homes being besieged by an intrusive media or angry protestors is a familiar one, in Ireland we expect restraint and even civility around the domestic space of public representatives.

That the Fingal group styles itself a ‘Battalion’ also conveys paramilitarism and a form of mob rule. Political protest, however, is always considered ugly by those in power, and an absolute ban on any form would set a dangerous precedent. What if the mob is actually in power?

Before the last Italian election a crowd, holding candles, gathered outside the Milan residence of Silvio Berlusconi, as a member of the Five Star Movement read out an indictment against the disgraced former prime minister, revealing his links to the real mob, or mafia.[v] It was a powerful democratic statement: calling a billionaire politician to account outside his home.

In order for a campaign on the margins to gain public attention a degree of civil disobedience is often required. That was certainly the case with the NAMA to Nature project in 2012.[vi] Ghost estates around the country appeared as a testament to folly and greed, making the public overwhelmingly receptive to what was a trespass on private property to heal the landscape by planting trees. 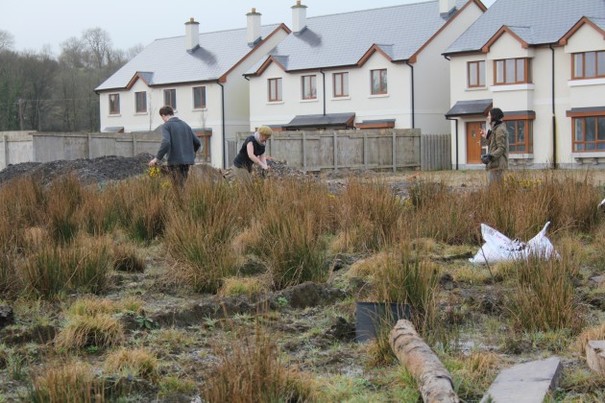 But since the Crash we have seen a steady reassertion of the rights of property-owners. This often works to the detriment of marginalised citizens, and can imperil the habitats of species under threat of extinction. Travellers also defy a widespread devotion to private ownership, making them a convenient target for unscrupulous politicians.

The government’s housing policy is failing at a fundamental level the ten thousand homeless citizens.[vii] An entrenched sympathy with landlords was set out by Eoghan Murphy in a speech to the Dáil last December:

Above all the government has failed to build the houses necessary to alleviate the Housing Crisis, at a time of when the states coffers are bulging. Taoiseach Varadkar’s oft-stated ideological opposition to socialism seems an obvious reason.

Upholding property holders rights extends to giving farmers free reign to do as they wish on their land. Last month Minister for Arts, Heritage and the Gaeltacht Josepha Madigan signed off on an order extending the burning season of uplands, the habitats of hen harriers and skylarks, among other wildlife.

Anne Marie Hourihane in the The Times Irish edition provided a scathing assessment of the Minister’s response:

At the weekend Josepha Madigan, the heritage minister, suggested that we address Ireland’s plummeting bird population by installing bird feeders in our gardens. Unfortunately, skylarks and hen harriers are not known for their attendance at bird tables, preferring to nest in uplands. Maybe the proposed bird feeders are intended as a diversionary tactic for the birds that will be nesting in the hedgerows in August. For example, your local yellowhammer — if you have one, as the yellowhammer is already on our danger list — might leave his hedgerow to get a slap-up feed at some well-appointed bird table, then fly back to his hedgerow, where he’ll say: “Hey, man, where’s my gaff? Also, the wife and kids . . .” It’s going to be a great craic.

Hourihane also highlighted an extension to the period for cutting hedgerows, which, she wrote, ‘contain so much wildlife, so many insects — including bees — so many small mammals, that they are a permanent wildlife programme all on their own. Now we will be allowed to cut them in August.’[ix]

Madigan’s response revealed either naivete, or a disregard for vulnerable species. Yet this runs contrary to the common good of preserving wildlife, potentially infringing what may, at a later time, be found to be in breach of any native species right, ‘to be, to habitat, and to fulfil its role in the ever-renewing processes of the Earth community’, as argued previously.

Leo Varadkar’s committed to an ‘extensive investment programme’ in the arts[x] during the Fine Gael leadership election, yet many artists and musicians struggle to afford a accommidation in Ireland. This is especially the case in Dublin, soon to be the EU’s most expensive city for rental accommodation.[xi] The plight of musicians is particularly difficult given how digital technology has decimated potential earnings from CD sales.

Songwriter David Kitt, who grew up in Madigan’s Dublin South constituency, where his father Tom Kitt was actually a Fianna Fail T.D., last year announced he was unable to afford accommodation in the capital, bemoaning how, ‘Dublin’s heart and soul is being ripped out and sold to the highest bidder.’[xii]

Furthermore, a recent letter signed by 407 members of the Irish theatre community claimed the direction the Abbey theatre is taking is causing ‘devastation among our ranks’, and pointing out there would not be a single Irish-based actor involved in any productions between September 2018 and February 2019.[xiii]

The Abbey, founded by W.B. Yeats and Lady Gregory, is the national theatre of Ireland. The staging of J.M. Synge’s Playboy of the Western World in 1907 there brought riots over an unfavourable portrayal of Irishness. A lack of indigenous theatrical productions today prevents similar interrogations of contemporary Irish culture, while forcing many thespians into exile.

True art and literature, as George Steiner argues, is ‘always, a critique’, involving ‘a value judgment of, the inheritance and context to which they pertain.’[xiv]

We have also learnt of funding being denied by Irish embassies abroad to Irish artistic endeavours that fail to cast the country in a favourable light.

The reliance of artists on patronage develops worrying dynamics. Will the anointed elite continue to pose the difficult questions essential to great works if funding is jeopardised? The major concern, however, is that Dublin, in particular, is being denuded of the vitality and originality of a vibrant artistic community, compelled to make their homes elsewhere.

Rare birds and feckless artists are forms of endangered wild life that do not fit comfortably into a society dominated by the interests of land owners. Those who invade the domestic spaces of politicians are roundly condemned, but can Ireland offer the sanctity of a home for all its species?

[ii] Article 41.2.1: ‘In particular, the State recognises that by her life within the home, woman gives to the State a support without which the common good cannot be achieved.’