I am a visual artist and improvising musician. I trained as a painter, but also worked with various media including sound, installation/performance, sculpture, print and photography during my studies. My visual work since leaving college in 1987 has largely centred around photomontage, and in recent years has moved into painting and drawing (still using photography as source).

I began using sound pretty much from the start in college, using found metals, initially to record with, and later use in live work, inspired by the work of Test Dept., Einsturzende Neubauten, z’ev & Bow Gamelan. I was also inspired by the work of Dome, :zoviet*france:, Hafler Trio, Strafe Für Rebellion, Nurse With Wound and others, and began constructing very simple tape collages which were used for tape/slide works and installations.

Apart from a brief flirtation with guitar in my teens, I am not musically trained. I got the hang of drums some years later and really enjoyed the physicality of that instrument, but never played in a band. Since college, I have continued in the vein of constructed and adapted instruments and tape collages. 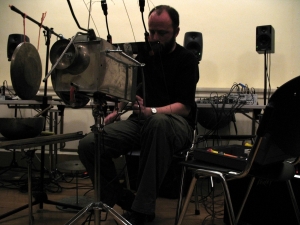 I’ve been passionate about music from an early age, and my love of the post-punk spirit of DIY and experimentation found a crossover with the further reaches of sonic exploration coming from the Fine Art approaches to sound as a sculptural medium. I then discovered improvised music and was smitten. The possibilities just seemed wide open. There was a directness and a simplicity that was really appealing. It was also a much quicker route to producing music by sidestepping years of training. Of course, it’s not just musical ability you bring to the table, it’s imagination and intelligence too.

The possibilities expand further when working with other players in an open dialogue with parity of presence, no grandstanding, all listening attentively as much as playing or not playing. Listening is key. I established a strong connection with drummer David Lacey early on, and went on to play and record on many occasions over the years in a very sympathetic and satisfying working relationship for which I’m really grateful – the natural chemistry is a source of great joy.

I’ve also worked with other Irish players such as Judith Ring, Jurgen Simpson, Paul Vogel,  & Dennis McNulty, as well as UK players Max Eastley & Mark Wastell. We put out a trio album to critical acclaim on Mark’s Confront label in 2019, The Map Is Not The Territory.

I have pursued this area of exploration ever since because it’s really where my heart’s at. I’m in my element. It’s a completely obsessive and highly fetishised world for me. I’ve always loved the idea of making something from discarded materials, the idea of transformation; base metals into… not quite gold, but something beautiful or intriguing at least. 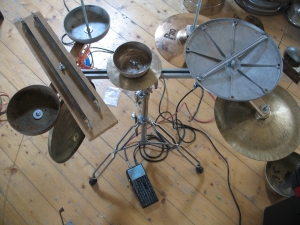 These materials inspire a particular approach with all their tactile and evocative qualities. Whole worlds can be constructed with these sounds with the compositional possibilities of the computer (4 track in the early days forced a particular discipline that’s served me well since). That’s the other side of it for me: the idea of making your own unique sound world, evolving a voice that establishes a particular presence, one that hopefully moves beyond your influences and into something different, something engaging and satisfying.

Brian Eno’s work in the 70s and early 80s was another significant inspiration for me, especially his On Land album. In his liner notes, he speaks specifically about the idea of landscape, memory, and a sense of place. He also mentions the notion of psychoacoustic space—the idea of using recording technology to create imaginary spaces and atmospheres: the suggestive power of sound. This absolutely got the hook in me.

Field recording has been a core element of my practice since 1986, when I bought a secondhand recording Walkman whilst on summer work in London (no summer work in recession-hit Ireland in the 80s). My immediate environment in all its fascinating detail became framed between my ears whilst listening on headphones. I was completely taken with the possibilities this offered for further manipulation/recombination, enriching my sound palette.

I went on to buy a DAT recorder in the 90s, and latterly have used the Zoom H4N flash card recorder, as a handy device that can be carried in a back pack. A lot of my recording would be opportunistic – hearing something that takes my fancy and capturing it, or returning later. For more involved recording, especially wildlife recording, I use a Sound Devices hard disc recorder with DPA mics in a windshield, or a Telinga parabolic reflector for capturing bird song. I’ve built up a considerable archive over the years, which I dip into for compositions which are either wholly field recording-based, or are one part of a composition, to add particular colour, texture and depth. 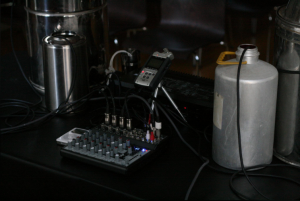 Feedback set-up with contact mics in metal vessels, from launch gig for A Congregation Of Vapours album at the Goethe Institute, Dublin, 2012.

When composing, improvisation is essential in building the material from the ground up, mainly because I can’t conceive of structures in the abstract as someone traditionally trained would do. But then that is only one system. Mine is another, admittedly more labour-intensive and time consuming one. I’m approaching it from an artist’s perspective – painting and sculpting with sound. Sound as raw, malleable matter to be manipulated – prodded, poked, pushed, pulled, beaten, hammered, scalded, stretched, scarred, chopped, diced, dessicated, burnt, and glued, taped, nailed and bolted back together again.

The editing of the material is where the pieces find their form. The painterly/sculptural analogy is apt as the sounds get built up and hacked back quite brutally, cross-hatched with other material, further distilled and recombined, depending on what’s working or not. Pieces can start out relatively long and end up a fraction of their original length.  And sometimes shorter pieces that weren’t strong enough to stand alone end up being stitched together into a larger piece. Listening is a really important part of the editing process. I would usually put rough mixes on CD and audition them at home for a period of time, let them settle – hearing them in much the same conditions as the listener. If there’s areas where I find I’m losing interest, then it’s got to be pruned. I shouldn’t lose interest for a second. I’ve got to be totally involved all the way. 4 & 6 string devices made with guitar and bass strings mounted on teak beams, made in 2014.

In 2005 I established my CDR label Room Temperature. I’ve released mostly solo material on the label since, in EP and full length album form, as well as two collaborative albums with David Lacey and a live album with David Lacey, Paul Vogel & Dennis McNulty. I’ve also released albums on Farpoint, Stolen Mirror, Unfathomless and Confront. September 2020 saw the release of my 16th item on my label, Plundered Lumber. 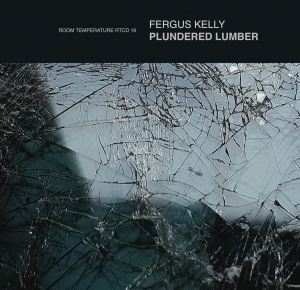 This is a 52 minute album comprising 13 tracks using mostly bass guitar and metal percussion. It’s a return of sorts to a form of composing last used about 20 years ago, where an emphasis on rhythmic interactions and melodic interplay was the main driver. I’ve used little or no processing (apart from some delay and reverb) and no field recordings. Some delays were added after, some used during recording, as a phantom rhythmic element to play against.

I did a lot of this kind of thing on the technically limited but (with lateral thinking) creatively manipulable 4 track  in the 90s with a mixture of drum kit, gongs, non-European percussion, found metals and bass and various small stringed instruments picked up in markets and the like. I used to put compositions on tape and give them to friends. Before graduating to digital tape and CDR, and long before online presence and downloads, the cassette underground was a lively and many-splendored thing.

One other recent development in my practice has been the creation of tribute pieces to artists whose work has had an influence on me. It began with a piece to celebrate ex-Wire  member Bruce Gilbert’s 70th in 2016, and went on in 2017 to celebrate the work of Bow Gamelan Ensemble’s Paul Burwell, marking the tenth anniversary of his death. I also marked Wire’s 40th anniversary in 2017, and the 40th anniversary of Joy Division’s Unknown Pleasures in 2019.

These pieces usually have about a 10 – 15 minute run time, and use a combination of edits of their music and music that influenced them, as well as other cultural influences – film, TV and radio, which I combine with current affairs snippets, comedy and interviews to create a rich portrait. This year I produced my most ambitious tribute yet – to the 1970s music of David Bowie, which ran to just under 22 minutes:

Another work recently completed in a similar vein, though it’s not a tribute as such, is Spectral Vectors, which was composed for Come Hell Or High Water, a monthly series of live events on the Thames foreshore at Poplar, organised by Bow Gamelan Ensemble’s Anne Bean and others. I was to have performed at this in September but the pandemic put paid to that. So Anne suggested I make a sound work in lieu. The piece I’ve composed takes as its starting point the idea of ghosts of the Thames; river revenants in the form of lost sounds of previous times from the river’s busier industrial past, such as ship’s horns, tugboat horns, foghorns and other industrial sounds.

Expanding on this theme, the idea of things lost/buried/hidden/removed came to mind. Documentary radio footage relating to sunken unexploded WWII ordnance and tragic drowning was combined with recent field recordings of mine made with contact mics attached to cabling beneath Millenium Bridge at St. Paul’s, amplifying sounds hidden to the naked ear, when the bridge is animated by foot traffic, wind coursing through it and sun warming it.

Municipal greed and acts of resistance also form part of the documentary material with Bob Hoskins enlightening Barry Norman in 1982 about various development scams along the river, Malcolm MacLaren talking about the Sex Pistols’ 1977 riverboat gig, and riverboat men going on strike. This footage is animated by the addition of lost ship’s horns, populating the river with a lively, boisterous presence.

Listen to the piece and read full statement here: