In my studio here, I have a clavichord, built by my parents in 1971, with a somewhat rococo and amusing backdrop painted by my mother (who otherwise has left us with a stunning body of mostly modernist artwork).

I grew up with this painfully quiet clavichord, along with a gorgeous harpsichord (also built by my parents, and which I learned to tune by ear, a sign of things to come), countless recorders of various shapes and sizes (both parents were avid and accomplished players), lutes, oboes, guitars, baritone horns, and of course a piano (my older sister, annoyingly, plays pretty much all of these instruments with ease, though piano is her main instrument, so I grew up hearing that repertoire through her practice).

The basement of my childhood home on Long Island was filled with various tools, wood scraps, and other evidence of my parent’s instrument building habits (both were amateurs, by the way: during business hours, my father was a theoretical physicist, my mother a painter), and our evenings and weekends were filled with making music together with these instruments (ok, maybe that is a bit of revisionist history there, but we did make a lot of music together with these instruments as a family).

I didn’t realize at the time that this wasn’t particularly normal. And one of the things that it marked me with is a love of musical instruments for their own sake, and a love of making music in an exploratory way with instruments at the heart of the process, performance relegated to a secondary concern. I performed, for sure, but it wasn’t the driving force behind the music making in my house, and we never performed together as a family.

It also left me with a clear sense that the instruments themselves were things we made—not immutable, given objects—and thus were potential sites for exploration and revision.

I loved my own instrument at the time—a somewhat tetchy violin made by the engineer Norman Pickering, himself a researcher of instrument design—though it took me a while to discover that the music I was learning with it—European Classical music—wasn’t, for the most part, what I really wanted to play (the Bach Unaccompanied Sonatas aside, really). Indeed, trying to discover the music that I do really want to play (and hear) has been the driving force behind my work ever since and has led to a number of explorations in musical instrument design itself.

In my early 20’s, I flailed about trying to find ways to escape the confines of the Classical violin—its repertoire and technical training that leaves such a profound, embodied mark on anyone who goes deep with it—which led to predictable explorations of jazz improvisation and rock music, both of which also felt not quite right, though I learned a lot, and in particular ended up spending time with, of all things, the Flying-V 6-string fretted electric violin by Mark Wood, and an unfretted version made by my father. 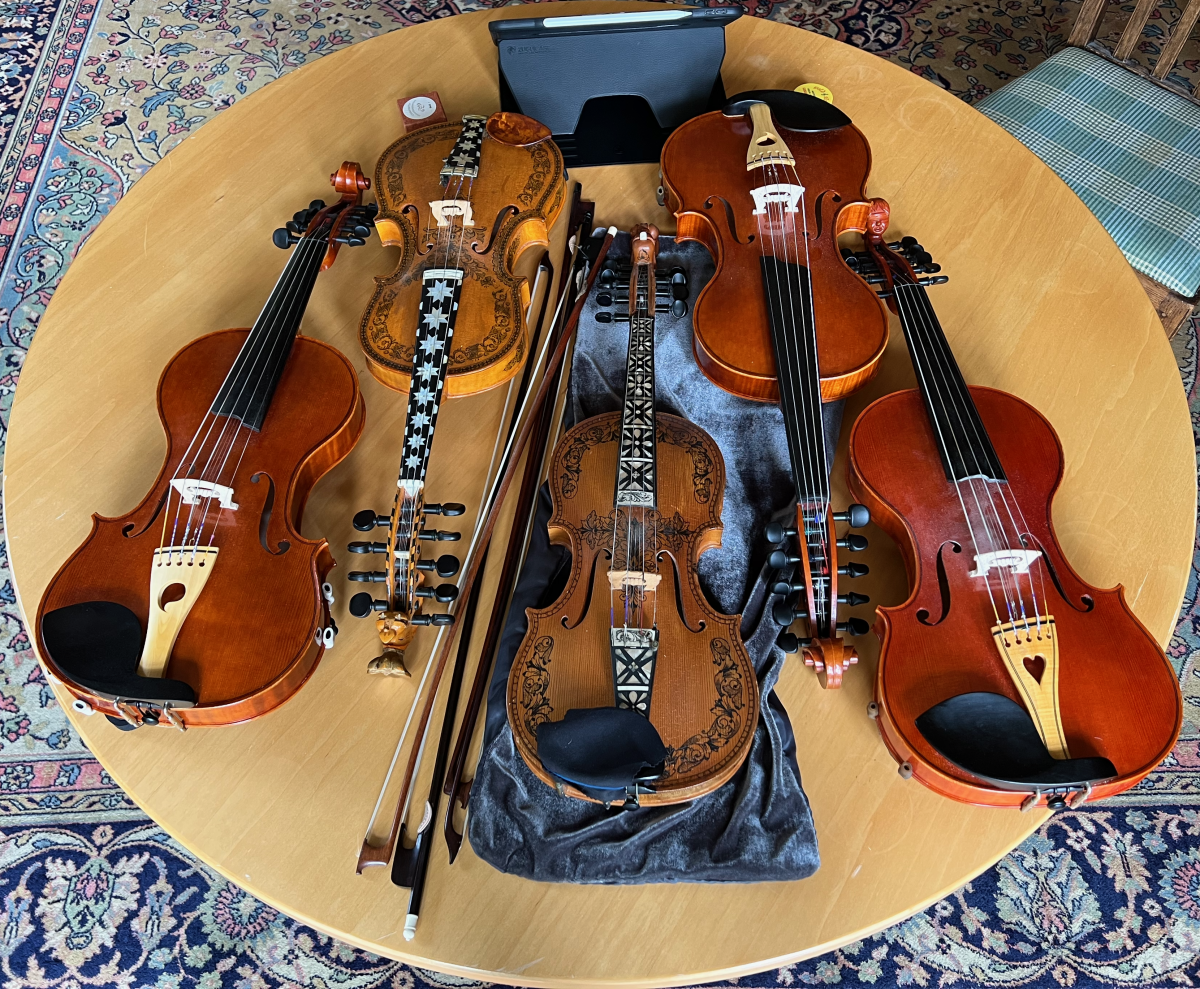 Ultimately, I found the sound of the instrument unsatisfying—in spite of my best efforts, including exploring multiple other electric violins, pick-up systems, amplifiers, equalization and signal processing units, and so on—as well as the feel of the instrument—the solid-body electric violin is perversely rigid, and doesn’t seem to actually absorb any of our physical efforts.

In the midst of these experiences, a composer friend of mine (Gavin Borchert) wrote a piece for me, for the electric violin, and he was inspired by the traditional music of Norway, in particular the Hardanger fiddle; my experience listening to the cassette tape he gave me—a recording of Anund Roheim playing music from Telemark in the 1950s—was one of those I will never forget; I remember where I was sitting, the time of day, the color of the sky, and so on, when I first heard the sounds of this magical, beguiling instrument and its mesmerizing music.

There is so much I could say about the Hardanger fiddle, but I will focus on the sound and feel of it. Its sympathetic strings (extra strings that run underneath the fingerboard and ring along as you play) create a magical, personal, reverberant space around the player and, in contrast to the solid-body electric violin, it is so clearly responsive to our efforts, absorbing and extending them into this private space; it feels wonderful—physically—to play.

Adapting my Classically-based technique to the instrument was far more challenging than I expected. The strings are slightly shorter, requiring ever so slightly different finger spacing, something that took months of slow practice to adapt to, especially given my own penchant for playing without vibrato, and for having the intervals ring as purely as possible.

But even more than that, adapting my bowing technique to the instrument was particularly challenging. The Classical violin is designed to be as loud as possible, to project over an orchestra to the back of a concert hall, and it requires intense arm weight and energy to drive appropriately.

In contrast, the Hardanger fiddle is designed to ring continuously, and it has a relatively flat bridge, so playing individual strings is difficult, and the strings are under noticeably less tension, so applying intense arm weight is counterproductive, suffocating the instrument rather than activating it. The instrument induces a more empathetic, gentle approach to playing, and I feel like I literally became a different person in transforming my physical technique to play it.

Musical instruments have a way of bringing people together; indeed, in Norway one of the most common experiences with other fiddlers is simply sitting around, trying each others fiddles, visiting with a maker (many of whom are fiddlers themselves), and so on.

The instrument itself is at the heart of the matter. The Hardanger fiddle brought me together with Caoimhín Ó Raghallaigh back in 2000; Caoimhín was working in my father’s physics lab, and I’m forever grateful to my father for recognizing that Caoimhín and I might like to meet!

Another experience I’ll never forget: sitting with Caoimhín that summer (next to the harpsichord my parents built, by the way), playing tunes for each other, trying each other’s instruments, and so on. Subsequent similar sessions with Caoimhín in Dublin led to the discovery that I was using the wrong bow, one that itself was suffocating the Hardanger, and we now both use beautiful bows made by Michel Jamonneau; teaching my body to work with this new bow (actually, more of an old bow, based on Baroque designs) was a whole other transformative experience, far more challenging than I anticipated.

Before I continue on with where my explorations of the Hardanger fiddle led over the subsequent decades, I will mention that during this time I was also exploring a whole range of other musical instrument design projects: my frustration with electric violin speakers led to collaborations with Perry Cook on the design of spherical speakers, which roughly emulate the way acoustic instruments fill rooms with sound; this itself led to the design of a radical new instrument, BoSSA (the Bowed Sensor Speaker Array), that is a spherical speaker outfitted with digital sensors of various sorts, so you actually bow the speaker itself, the sensors then mapping your physical actions to sound through the spherical speaker (sitting in the lap!) via a computer. 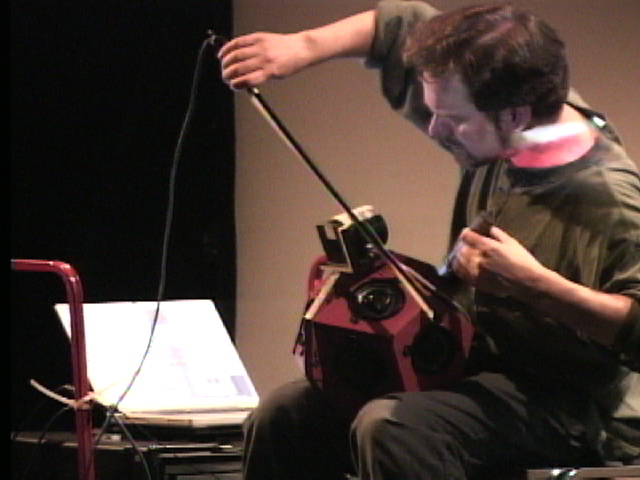 This led to the establishment of the Princeton Laptop Orchestra (PLOrk), a kind of digital musical instrument design laboratory that remains in force today; which in turn led me to the development of bitKlavier, a kind of prepared digital piano that remains one of my primary projects today. 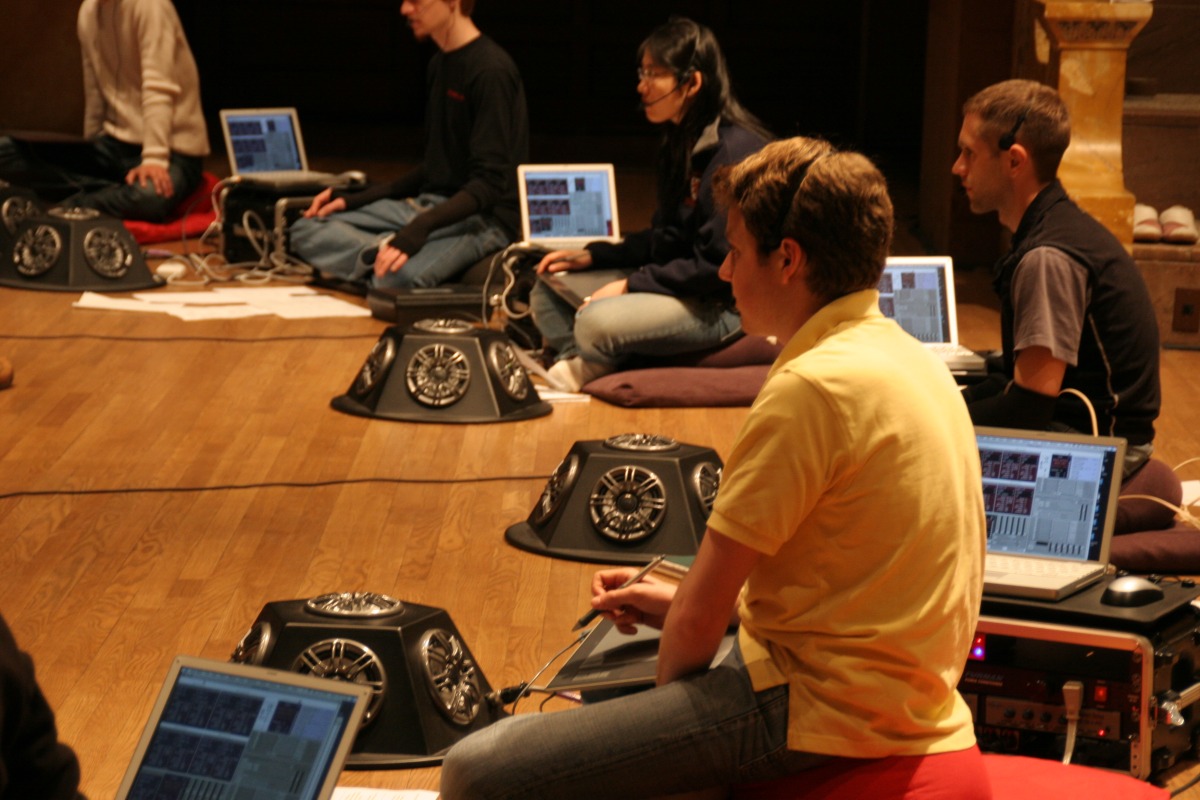 All that to say that musical instrument design has been at the heart of my artistic practice from the beginning.

Back to the Hardanger fiddle… Some 15 years after my deep dive into the Hardanger fiddle began, I had the pleasure of collaborating with the Old Time fiddler Brittany Haas. Britt plays the 5-string fiddle; the extra string is lower, and she regularly tunes the instrument up in unusual, non-standard ways, which is also common with the Hardanger fiddle—all the open strings invite a drone-based approach to playing, with lots of double-stops (two notes at a time).

One challenge though: the Hardanger fiddle, with its shorter strings, is usually tuned up quite a bit higher than the conventional fiddle, so when Britt and I would play, all of our open strings would be different from one another! In some cases, this was fodder for creative explorations, but other times was just frustrating and awkward. We did make an album together that I’m tremendously proud of—CrissCross—but the friction between the instrument designs led me to wonder whether there might be a new instrument out there, some kind of cross between the Hardanger fiddle and the 5-string fiddle. 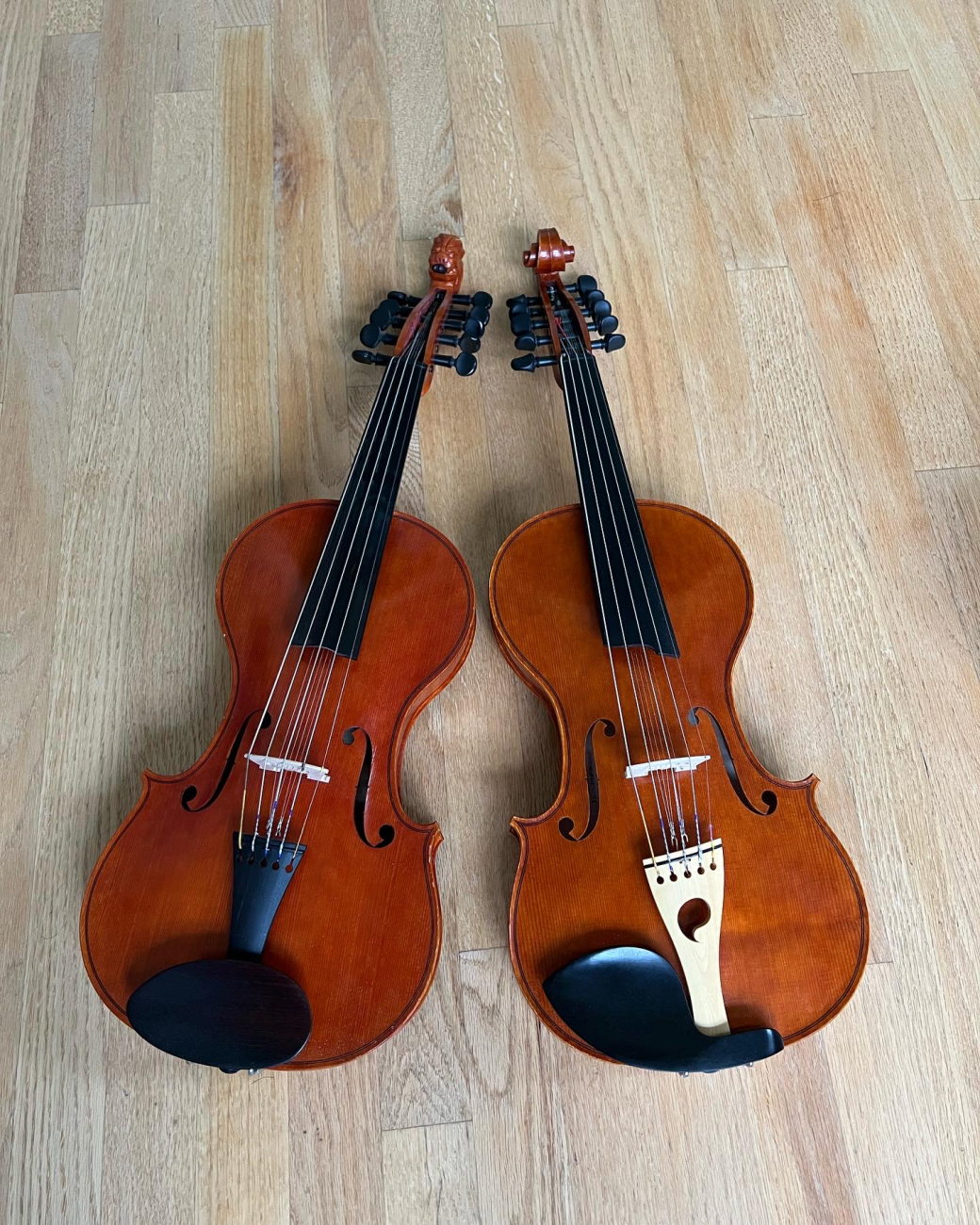 A pair of Hardanger d’Amores.

And this is how the Hardanger d’Amore was born. In early 2010, I asked the Norwegian maker Salve Håkedal if he could imagine an instrument that has the ring and feel of the Hardanger fiddle, but is tuned down to where fiddles from the rest of the world are tuned, and also has an extra low string.

Salve immediately started sending me sketches and ideas, and several months later I traveled to his workshop in southern Norway to pick up the very first Hardanger d’Amore (initially we called it a 5+5, because of its 5 strings on top, and the 5 sympathetic strings, but later Caoimhín dubbed it the Hardanger d’Amore, given its echoes of the Viola d’Amore).

At the time, I was living in Dublin, and when I returned with the instrument, Caoimhín came by and gave it a try; he ordered #2 the very next day. Earlier this year, Caoimhín and I both got our second d’Amores, #35 and #36, a clear indication of how excited we both are about the instrument, not to mention the other 30+ fiddlers out there who now play one as well.

Last year, in the midst of quarantine, I made a solo album of original music for Hardanger d’Amore in my home studio. I generally prefer playing with other people, and am not so interested in playing solo concerts, but the lockdown made both impossible, so I was free to lay down some tracks that I certainly would not have had we not been so isolated by the pandemic.

The album—Fifty Five—is something of a surprise to me, and it celebrates where I grew up, amongst the instruments that my parents built and played. It also celebrates the instrument itself, trying to reveal and discover some of the nooks and crannies of the soundworld the instrument embodies.

I recorded these tunes up close, so the listener can hear something close to what I hear, right under my ear; I find it intense and personal but also, I confess, quite beautiful.  I’m also excited about my latest project with Caoimhín, our album The Fate of Bones, which he’s written about here so I will leave it at that.

We are an independent media platform dependent on readers’ support. You can contribute on an ongoing basis via Patreon or through a one-off contribution via Buy Me a Coffee. Any small amount is hugely appreciated.