In a suburban Dublin pub ten men aged sixty and over have gathered in a circle each week to play traditional Irish tunes. I joined this weekly session when I moved back to Dublin and after initial bewilderment was embraced by the group. I was the only woman that had ever joined in the twenty odd years the session had existed and I grew to love the chats and the musical immersion that it became.

At some point in each tune set we all closed our eyes and it felt like it really didn’t matter that I was female.

I discussed with Mairéad Ní Mhaonaigh in an interview recently how music can be something that rises above divisions and transcends gender, race and politics. Sadly of course, this is not always the case. It was disturbing last year to read the revelations of the Mise Fosta (Me Too) movement which detailed the experiences of young musicians in the Irish Traditional music scene. The reports, which came from mostly girls, consisted of unwanted physical contact, sexual assault, harassment and degradation. 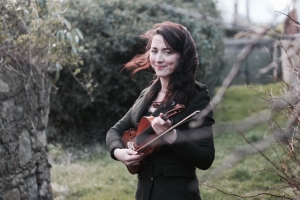 It saddened me deeply to hear about the number of musicians that have left the scene due to this kind of behaviour. I’ve experienced both sides of this coin. I’ve met some of the kindest men I know through pub sessions in my journey back to playing music again publicly. And I’ve also experienced subtle and not-so-subtle forms of inappropriate physical contact and degrading comments from pub-goers, and from musicians themselves; followed by ‘sure it’s only a bit of craic.’ Unfortunately, it’s the kind of ‘craic’ that drives talent away from the scene.

A young female musician I spoke to recently described lecherous comments she often experiences online as the ‘cross we have to bear,’ as women in the industry. Another musician I know will avoid a particular number of sessions because of the consistent unwanted advances of a fellow musician who attends them.

This kind of behaviour has typically been quietly tolerated as ‘the cross we have to bear.’ But we are in an age of increasing disclosures in Ireland and globally regarding abuse of many shapes and kinds. (The recent harrowing revelations of the treatment of women in Mother and Baby Homes in Ireland is just one example of this).

Voices of all genders in Ireland have been heavily suppressed in relation to these matters so all speaking out must be applauded. In continuing to break this silence, we’re slowly becoming part of a wider global story, where the veil is being lifted on many forms of abuse and inequality. As humans we love to create categories of ‘me’ and ‘other’. We are better and the ‘other’ is lesser. Male-female, white-black, able bodied-disabled. Yet these hierarchies are slowly being dismantled all over the world. A huge amount of people are waking up to the realisation that these imagined hierarchies are cultural constructions which could easily have been otherwise and must be challenged.

Traversing a Wave of Change

Both men and women need support to traverse this wave of change. All genders need education at every stage of schooling about not just the concept of consent but what that looks like in real life circumstances. Inappropriate comments, contact and expectations need to become rejected in the music scene, in person and on-line, as well as on a cultural and societal level in Ireland. We need to release the shame attached to discussions around sexuality, around our bodies and what is and isn’t acceptable to us.

These types of conversations around sexuality have slowly been opening up in Ireland. The TV series Normal People last year opened avenues of discussion many of us had not foreseen (Liveline radio programme to name just one). My father was of the opinion that the series should be shown in every secondary school in the country to educate teenagers about healthy consent. I also had a lengthy conversation with my aunt, a religious sister in her seventies, about the portrayal of the lead character Connell’s refusal to hurt Marianne during sex as she requested.

‘That was exercising his right to say no,’ she’d said at the time. ‘It was very important to show that men need to be able to say no as well. It works both ways, you know.’ ‘’It does work both ways,’ I had agreed with her. It is not a case of  ‘men vs women’ in this particular arena. That is not a narrative that I believe will get us any further.

We discussed how every person has both masculine and feminine elements within them which need to be developed. As a fundamental element of the patriarchal structure, to show emotions, for men, is often seen as a sign of weakness. And so men are typically encouraged from a young age to bottle up these more ‘feminine’ aspects of their character. Ireland has one of the top five highest rates of suicides for men aged 15-24 in Europe. There are clearly elements of the patriarchy which are not favouring men either. We are clearly missing a trick somewhere in preparing young people of all genders for adulthood.

Some strong indicators are showing that we are on the right path. The Fair Plé movement which advocates for gender balance in the Irish Traditional & Folk scene has recently developed an Anti-Harassment Policy for use across all arts sectors and Sexual Harrassment guidelines in collaboration with the Rape Crisis Network Ireland, which are important steps towards highlighting and addressing these issues. These can be used by all pubs and music festivals and generating awareness of these policies is a key part of moving forward. The Speak Up ACTiON Survey is a survey of all arts workers and their workplace experiences which will inform policy and the development of artist supports for safe and dignified work spaces. Fair Plé and SAOI are also pushing for a neutral independent complaint structure with investigative powers across all arts sectors.(1)

Three weeks ago we launched the Speak Up ACTiON Survey of arts workers & workplace experiences. We have had 1,150+ responses but we want more!

You have ONE WEEK LEFT to respond & we want to hear from you.

Beyond the pub scene, the facts are staring us in the face that women’s voices are under-represented in the arts in general. Music consultant Linda Coogan Byrne and folk singer Áine Tyrrell published a Gender Disparity Data Report in 2020 highlighting that female artists take up less than 5% of airtime on Irish radios. The ‘Why Not Her’ campaign is currently making huge strides towards eradicating this bias.

Clearly it is not just revelations of abuse that are required to instigate change but cold hard facts and key players in the Irish Traditional Music scene are doing Trojan work towards developing these statistics.(2)

I sincerely hope that women who have left the Traditional Irish music scene can come back and can feel safe in doing so. We need to hear women’s voices, in real time, performing. And we need to keep supporting each other as women in making this happen.

We can choose to silence ourselves also in many ways; through allowing internal critical voices to hold us back or by buying into the unwritten rules of the patriarchal structure we were brought up in that tell us our voices are less worthy of being heard.

Or we can do none of this and allow our voices to be heard. Write the song you’ve been humming for years. Pick up the instrument that’s gathering dust. Get up and dance at a session if that’s your thing. Take your place in the scene, with respect and kindness towards all genders, sexualities, races, people. Yet call it out when that respect is not shown back to you.

For men, you are more visible in the industry. Use your visibility to make sexual harassment and inequality no longer acceptable. It’s no longer enough just to not take part in sexist behaviour. Misogyny in all it’s subtle and not so subtle forms needs to be denied air time for good.

Music, to me, is the most powerful force on earth for bringing people together and none more so than Traditional Irish music. I believe we can figure this one out.

Louise O’Connor is a fiddle player, sean nós dancer and hosts Music As podcast where she interviews guests about the role music plays in their lives.

Why Not Her? is a social media campaign and podcast launched by Linda Coogan Byrne to ‘amplify the voices of woman in the music, entertainment and arts industry.’

Irish Theatre Institute has launched Speak Up ACTiON Survey- a survey of all arts workers & their workplace experiences which will inform policy & the development of artist supports for safe & dignified work spaces. Complete the survey here:

If you have been affected by the contents of this article support is available at:

I would like to thank Joanne Cusack (FairPlé) for her support in writing this article.

Louise O’Connor is a fiddle player, sean nós dancer and hosts Music As podcast where she interviews guests about the role music plays in their lives. Website: www.louise.ie @musicaspodcast