For the purpose of perspective, I should like to carry out a short comparative study of two poems treating the subject of the sea. The first poem I should like to focus on is the great sonnet by Charles Baudelaire L’Homme et la Mer, whose composition dates back to 1852. The second poem is a poem I wrote sometime last year, L’Homme et la Merde, in which I use the poem by Baudelaire, as an obvious starting point, in order to attempt to underline the epic social and ecological shifts which have occurred in the time frame of the composition of both poems.

So, to be absolutely clear, the period of time that separates both poems is one-hundred-sixty-three years. Without further ado, here is the poem by Buadelaire, followed by my transversion into English of his great poem; ….[1]

Man, free, you will always cherish the sea!
The sea is your mirror; when you stand before it
And contemplate your fate, before its infinite movement,
Your poor mind, brine wracked, couldn’t be more bitter.

Yet, you enjoy plunging into the heart of yourself;
Distracted by the immensity before you, and which
Makes you forget, momentarily mesmerised by such
Sheer force, your own apocalypse riding before you, wave bound.

You are both just as dark and fathomless;
Man, like the sea, nobody has reached your depths, yet;
Both of you guard jealously your great secrets,
Which you both refuse to give up, without some savage consequence.

For innumerable millennia you have both now been struggling
With one another for survival, both just as pitiless,
Both of you loving, as you do, carnage and violence.
O you two blood brothers, eternally vying…

Baudelaire’s poem has all of the hallmarks of late nineteenth century romanticism, written as it was just one year after the publication of Herman Melville’s Moby Dick (1851), and just forty-eight years after Beethoven’s composition of the Pastoral (1804) , his symphony number six. All three works are primarily concerned with man and his extremely precarious place in nature.

Ahab’s apocalyptic fate in Melville’s epic account of the hunt for the great white whale has become emblematic of humanity itself, in our own relentless pursuit to harness nature for our own ends, without thinking about the consequences. Beethoven’s storm in the sixth taking on a very ominous nature when listened to today, as our own climate continually shifts into  extremes as a consequence of the impact of our society on the planet, and particularly so within the time frame of the last fifty or so years. 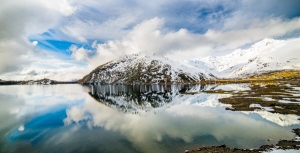 Indeed, today we are aware of the extremely negative impact our collective behaviour is having on the planet; be it as a direct or indirect consequence of global deforestation, industrial waste (atomic or other) or the continuing emissions from fossil fuels. We are now all collectively responsible for the state of both the immediate world in which we find ourselves living in today, in other words our own particular microcosm, as well as the greater macro-environment which we communally share, for as long as we humanly can. And, of course, this is the huge question looming over us all today:

If we continue living as we are without each of us making dramatic changes to our lifestyles in terms of how we eat, spend etc. these so – choices we make every second of each day – how much longer will the Earth be able to support us before we are all completely annihilated?

In order to frame the question better, I should like to introduce the second poem now L’Homme et la Merde, which I wrote shortly after having been diagnosed with chronic ulcerative colitis early last year.

For the purpose of clarity, the medical condition known as colitis is a terrible affliction caused to the intestine and the bowels, in which the sufferer loses all control of their system, causing unimaginable horror and distress. It is classified as a disease and it is on the increase in countries all around the Western hemisphere; interestingly in Asia, where people have a radically different type of diet, and lifestyle, people suffer from it far less. In my own case, the elimination of gluten is what stopped, eventually, the horrendous impact that this sickness was causing to me and my family.

I wrote a lot of poems of a very scatological nature, while suffering from colitis, although the poem L’Homme et la Merde is, without doubt, the most troubling of them. This poem reflects an apocalyptic vision of the future of our seas, if we do not do something now to change the way in which we are living.

This can be indicated quite simply. For example, one June weekend, here in Skerries, north county Dublin, the front beach had to be closed to swimmers due to a possible leakage of effluents into the sea. It was a terrible thing to experience, as the sun was out that June weekend, and people had come from all parts of Dublin, and possibly beyond, to enjoy a day by the sea. Instead, they had to be informed by the lifeguards that if they wished to swim in the sea, they would be putting themselves at risk of getting very sick due to the effluent which was now polluting our once beautiful coast.

Brown Tide: Five Signs the Irish Government Could Not Give a Shit about the Environment @frankarmstrong2https://t.co/GRXMCmzXQT

In fact, in Skerries it is a well- known thing – the risk of contamination – as for a couple of years now the town has lost its blue flag due to such incidents related above. But this is just one story, and on a local level. Now add to it every coastal town in the inhabited world, as you can be sure that we are not alone. Imagine the collective damage that is being done?

Why, during the twenty first century, are we still allowing sewage, and other toxic matter, to be pumped into our seas? This is just a basic question, yet which needs an immediate response. Particularly when one considers how the harnessing of bacteria, found in faeces, can create biofuels potentially saving billions; plans are already afoot in Washington D.C. in an attempt to create alternative ways of making energy in order to generate electricity in the city, using faecal matter![2]

And that is besides poisoning ourselves: our bodies are not designed to tolerate enormous quantities of gluten. What hope do we possibly have of saving the planet around us if we cannot preserve our own health?

Ignorance, it would appear, is our greatest enemy. And, here is the hope, as this is something we can all start changing, immediately. All we need is the desire.

Sheep, a ghastly consommé, to the swirling form of cupcakes.
These vertiginous constellations, floating like malignant nebula
In the solid throne at the end of your hall… Shit, excrement, stools,
Call them what you will. Yet, these grotesque floaters

Will be the very last trace of you. How apt, being a member
Of a species which would appear to be shit-infected.
Le mot de Cambrone; MERDE
Le merde qui est partout.

The shitty structures which we maintain and perpetuate.
Up to our necks in it. Won’t be happy till we’re literally
Drowning in it.

“Now man,” through these sweetened dumplings
Nature seems to be whispering to you, “Embrace
The imperium of your turbulent, khaki -coloured oceans.”