It is thirty years since I consumed my last drop of milk and the food scene for vegans in Ireland has changed considerably in that time. Back then options for eating out were fairly limited, although there were always a few vegetarian places along with Indian, Italian and Chinese restaurants that could easily cater for me. This article will provide a snapshot of established businesses, operating from fixed premises, in the south and west of Ireland, which I regularly visited.

I only review restaurants that do not serve meat, so all are either vegetarian or vegan. It is by no means exhaustive, and I invite readers to contact me with updates so I can try out more options country-wide and provide further details for future pieces. Before I get started I’d like to draw attention to the wonderful resource of a nation-wide database of Irish eateries set up by the Irish Vegans group some years ago. It is regularly updated and available at this address: http://irishvegan.ie/eating-out/. This is a volunteer effort so you could consider becoming a contributor too. It works best as a community forum. Reviews can also subsequently be contributed to the Happy Cow website and TripAdvisor so that overseas visitors who might be unfamiliar with the Irish database have other sources of information.

Being from Cork and working in Galway, I get to pass along the western corridor a lot so I try to take in towns and cities along the way such as Ennis and Limerick. I also occasionally find myself in Dublin. So in order to avoid capital discourse, I’ll start with Galway which has two vegetarian places: the Lighthouse Café and TGO Falafel.

The charming Lighthouse Café is on Upper Abbeygate St. and has been open for several years. It serves a full menu and also does takeaways, including cakes. It has hearty options such as a daily soup, hotpot served with rice and salad, a burger with gluten free options, hummus and salad. There are several desserts and they have an array of plant milks for teas and coffees. If you are planning to go for lunch, however, you have to get their early as it fills up fast. 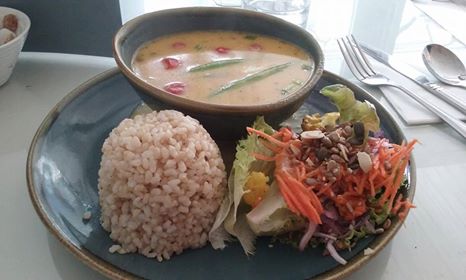 TGO Falafel started with a stall in the Saturday market where it thrived on its falafel and hummus offerings. It now trades from a premises on Mary Street, where it not only serves Middle Eastern comestibles but also has added popular dishes such as Indonesian gado gado, tempeh and curries. Their aubergine is to die for. They have a mezze plate for two which is enormous, and delicious. They also offer dessert, which is made by Bliss Bites Bakery, a popular raw vegan bakery. Again, TGOs has limited seating, all of which is upstairs. 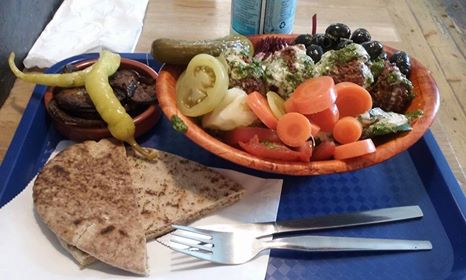 Heading southwards on the M18, Ennis is about an hour from Galway. Awaiting you there is Peckish Café in a pedestrianised part of town very close to the centre. The owner also has two adjacent shops called Meanwell, one of which is a health food store with some exotic items I have not seen elsewhere (such as spelt wraps and unfamiliar vegan cheeses from the UK), as well as a fruit and vegetables shop. They also stock dried goods such as pulses and grains, in bulk with minimal packaging, and you can fill up containers there, saving on plastic.

Peckish Café has been open for nearly two years and is positively thriving. It is spacious with both tables and sofas. The Clare Vegans meetup group get together there most Saturday afternoons for a late lunch or coffee and dessert. They have a fairly extensive menu with a wide range of ethnic dishes such as Asian pancakes – a personal favourite – and Mexican quesadillas with vegan cheese. They also have daily specials and lots of desserts: both raw and baked. Not being a tea drinker I can only vouch for the coffee served with a range of plant milk options. 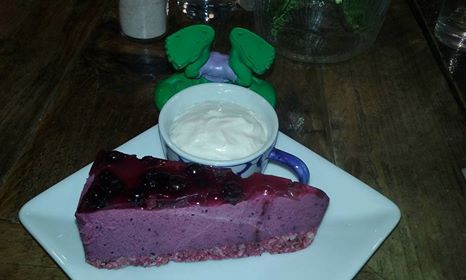 Next on this southward route is Limerick city, and I often get off the motorway between the City of Tribes and Cork especially for the city’s vegan options. First port of call is the Grove on Cecil St, a small restaurant with big flavours, open Monday to Friday from 9.30 to 4. For vegans there is a really tasty nut burger and generally a dal or curry, all served with hot vegetables, rice and a range of salads with a sprinkling of toasted seeds, often with tamari. They pay great attention to detail, for instance: I still fondly recall a rich tomato salad infused with basil and dressed with balsamic vinegar. Even though I usually order several salads, the flavour from each one on my plate is generally distinctive and memorable. The portions are generous and there are also desserts. But generally I am so full up I don’t indulge! The Grove is quite small and sells out fairly early so if you want to get in for lunch, do not tarry. 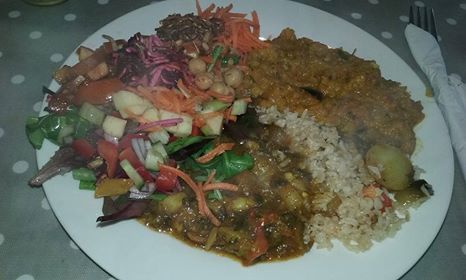 The next stop in Limerick for vegans is the Old Fire Station which is a vegetarian restaurant with many vegan options open some nights of the week. Their main courses are really delicious, but their vegan cakes are the real stand out. These are traditionally baked cakes, which is a welcome relief from a growing obsession with reducing carbohydrates and championing fats and proteins instead. The purpose of cake can sometimes get lost. In my book they are there to bring pleasure! The Old Fire Station never disappoints, and I’ve enjoyed both their lemon and chocolate cake that most people would never guess were vegan.

Limerick will soon welcome the Underdog, a new vegan café and restaurant that is about to open up. One more reason to bypass the motorway on my travels.

My only quibble with most of the eateries above is that they rarely stock vegan cream. I cannot comprehend why they stock vegan cake and offer either dairy cream or nothing at all. Vegan cake without vegan cream feels austere and hardly worth the inevitable calories. I’ve asked repeatedly in the Lighthouse over the years and got nowhere, and Peckish, the all vegan café is often out of it, even though they have a shop across the road. Bizarre! If vegetarians get more than me then I want a euro off! Or they might even offer custard (but not yogurt – it’s not sweet enough).

In the next installment I’ll give an overview of the vegan scene in Cork and hope to show that Ireland is a very good place to be a vegan right now, and it is only likely to improve.