The adventure, the great adventure is every day to see something new emerge in the same face, and this is greater than any journey around the world
Alberto Giacometti

Finishing a piece is complicated. The decision is sometimes based on whether there are enough lines and shades on the page; everything is balanced. This generally means it is, compositionally, a good work or drawing.

If you are fighting with it and grappling with too much shade or darkness, it can get tricky. In my process, I often cut up or crop drawings to improve their composition or remove an element that is not working – it’s the last effort at salvaging a piece – and it doesn’t always work.

Some pieces stay in folders, unseen, invisible. Then there are drawings that can take less than ten minutes to complete – a quick adjustment in perspective or switch from pen to brush can alleviate any problems that were caused from the first attempt.  In drawing, there is no right or wrong approach, and experimentation plays a crucial role in the process.

Seeing images from different perspectives is fascinating. It was Goethe that said every new object, well observed discloses a new organ within us.

So something new gets created or ‘disclosed’ when I photograph River House – a concrete office block near the Liffey in Dublin.  When I collect the 35mm prints another new organ is disclosed. 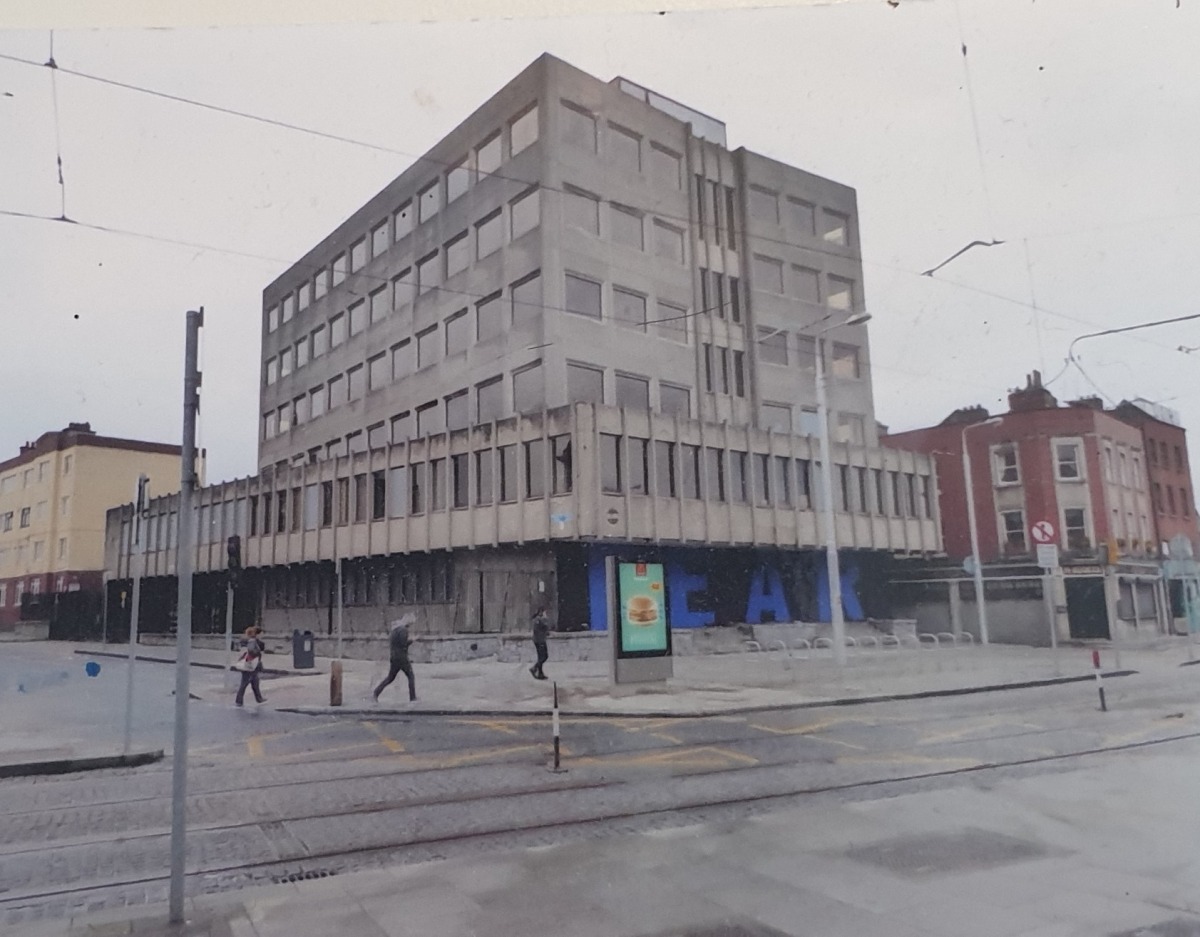 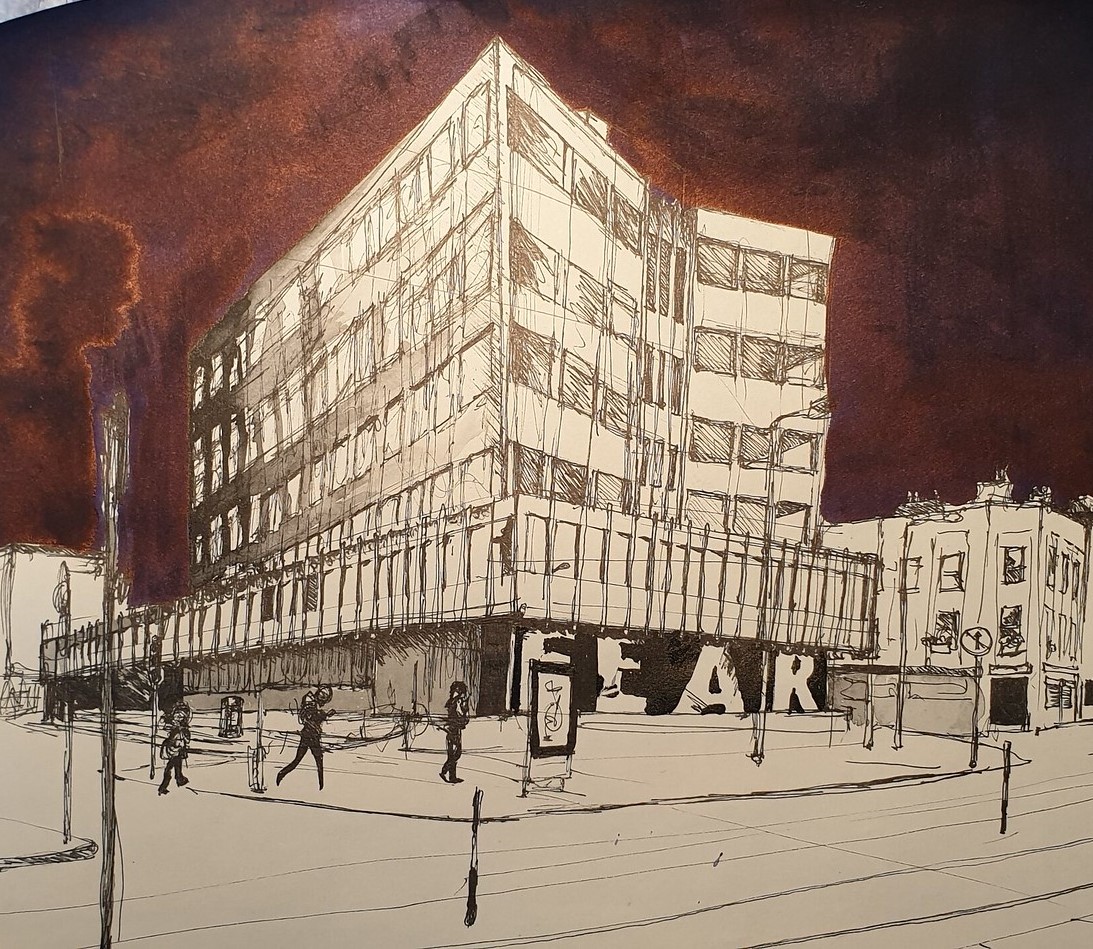 Same goes for when I sketch from the photographs, perhaps more than once, and when I unwrap said picture from the framer.

Another new organ can be disclosed when I see the picture in different surroundings hanging perhaps on an unfamiliar wall.

River House has since been demolished to make way for a hotel, another new object I suppose. Both the photograph and the drawing become part of the architectural history of Dublin, in a way an archive of an ever-changing city.

It is often the architecture of cities that I am interested in, whether that be bridges, historical buildings, or their infrastructure.

The Process of Creation

Every new object, clearly seen, opens up a new organ of perception in us
Goethe 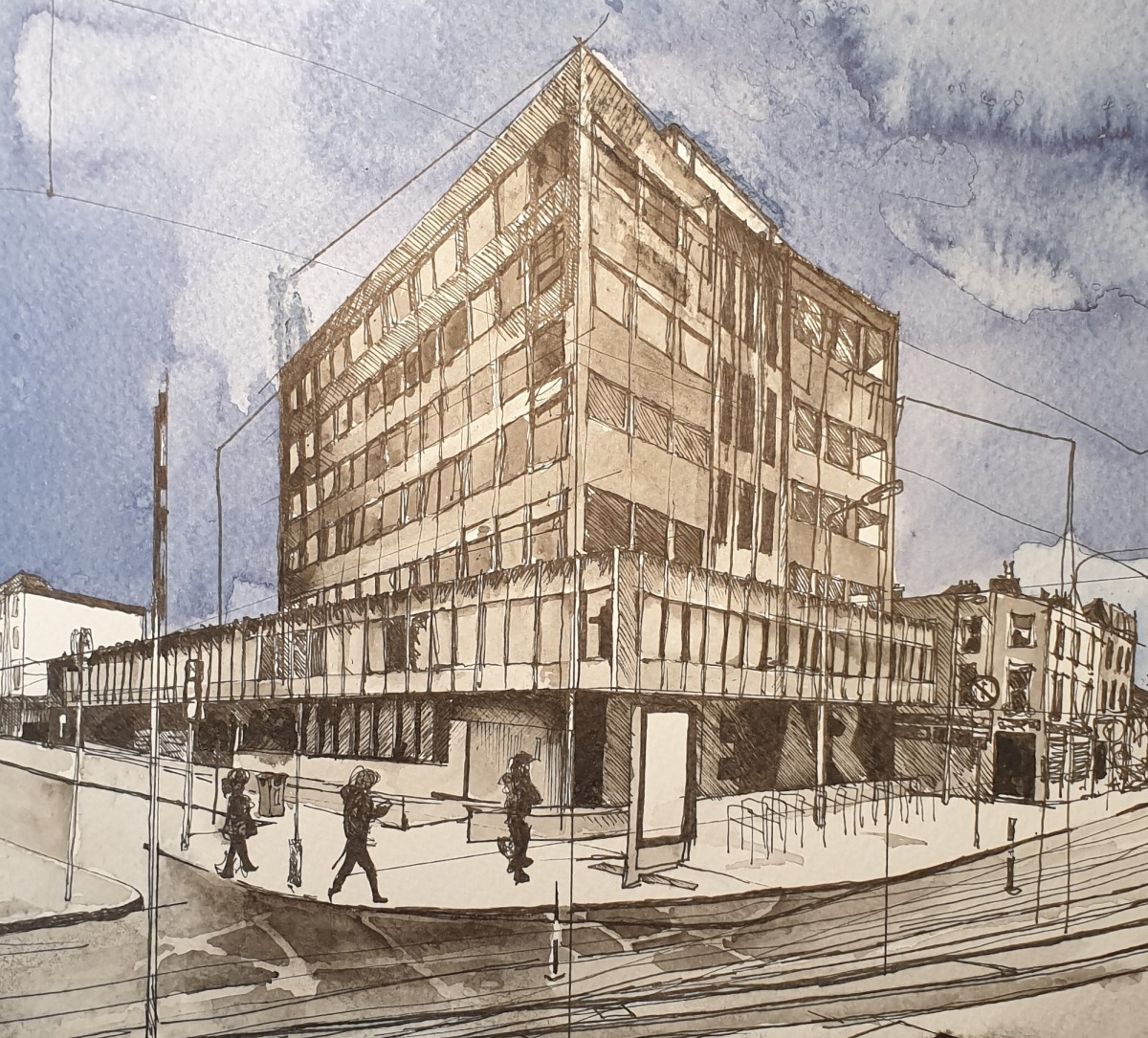 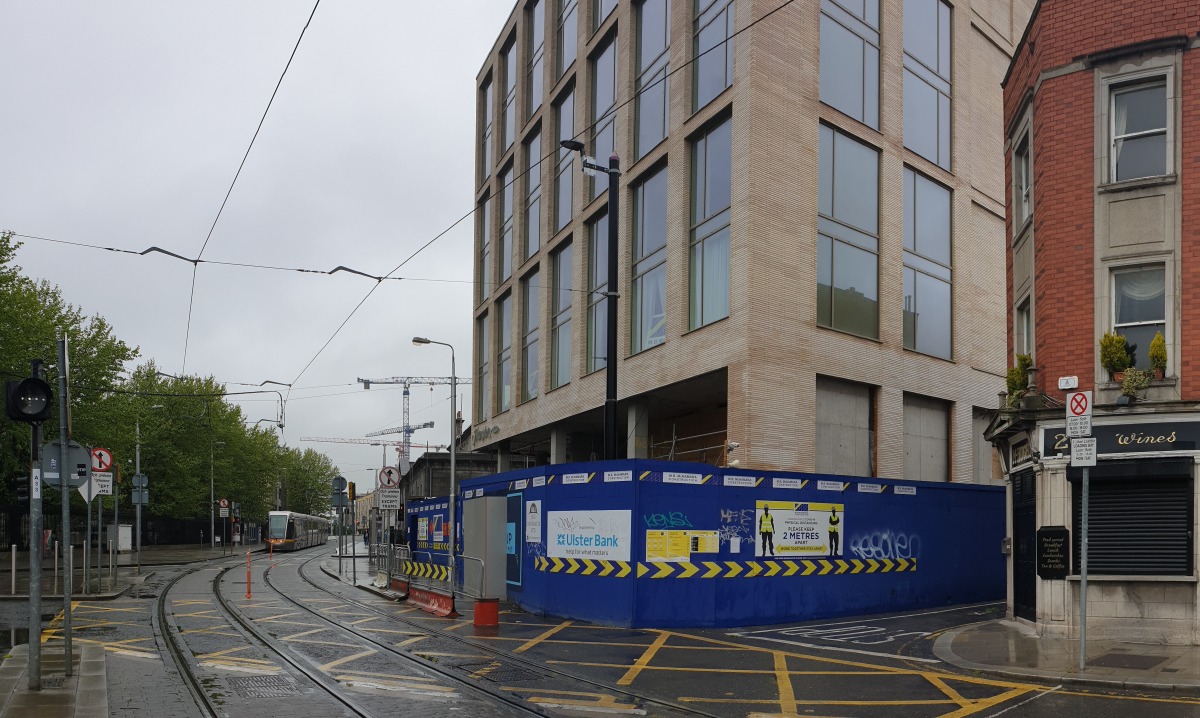 Site of River House since demolition.

This process of creation, image-making or mark making, changes how I see the original location.  Having photographed and painted the interior of Dublin’s General Post Office or Busáras, one of Ireland’s most important modernist buildings, it is a treat to return to these spaces and see how they have changed.

The experience of image-making changes my perception of the spaces also – having observed the object (for example the GPO main hall) I have the ‘new organ of perception’ is present when I revisit.

Bertrand Russell (1872-1970) posited sense data as “third things”, standing between material objects and perceivers, and serving as the immediate objects of perception.

Sense data are the things that are immediately known in sensation: such things as colours, sounds, smells, and so on.

Russell used the object of the table as an example: ‘The real table, if there is one, is not the same as what we immediately experience by sight or touch or hearing, is not immediately known to us at all, but must be an inference from what is immediately known.’

Russell wanted a new connection between sense-data and objects; a new conception of objects as logical constructions built out of or referred from sense-data.

Objects themselves cannot be viewed as substances without sense-data, they alone are invisible.  Everything we see is an image itself – a projection.

My work is this third thing – the immediate object of perception. It is an effort to understand objects and how the brain perceives them by slowing down the process of visual perception, picture by picture.

Turlough Rynne is an artist based in Ireland. For more information visit www.turloughrynne.com 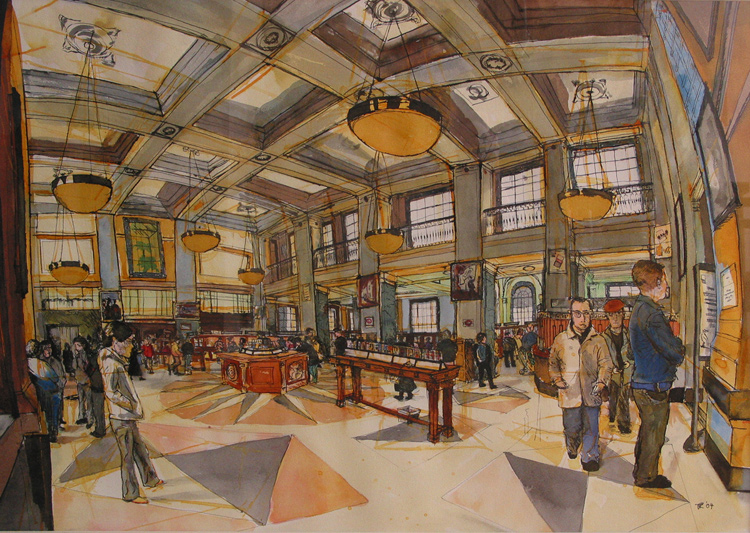