Marc di Saverio hails from Hamilton, Canada. His poems and translations have appeared internationally. In Issue 92 of Canadian Notes and Queries Magazine, di Saverio’s Sanatorium Songs (2013) was hailed as “the greatest poetry debut from the past 25 years.” In 2016 he received the City of Hamilton Arts Award for Best Emerging Writer. In 2017, his work was broadcasted on BBC Radio 3, his debut became a bestseller in both Canada and the United States, and he published his first book of translations: Ship of Gold: The Essential Poems of Emile Nelligan (Vehicule Press). On May 1st, 2020, Guernica Editions published Crito Di Volta. Di Saverio studied English and History at McMaster University, but never took a degree, due to illness. He is the son of Carlo Di Saverio, the scholar and teacher who studied Linguistics and Languages at University of Toronto (M.A.,1981). Di Saverio’s poem, “Weekend Pass”, was adapted into the movie, CANDY — directed by Cassandra Cronenberg, and starring the author himself — which was selected to the Toronto International Film Festival in 2013. In late 2020 he received Nobel Prize in Literature nominations, chiefly for CRITO DI VOLTA. 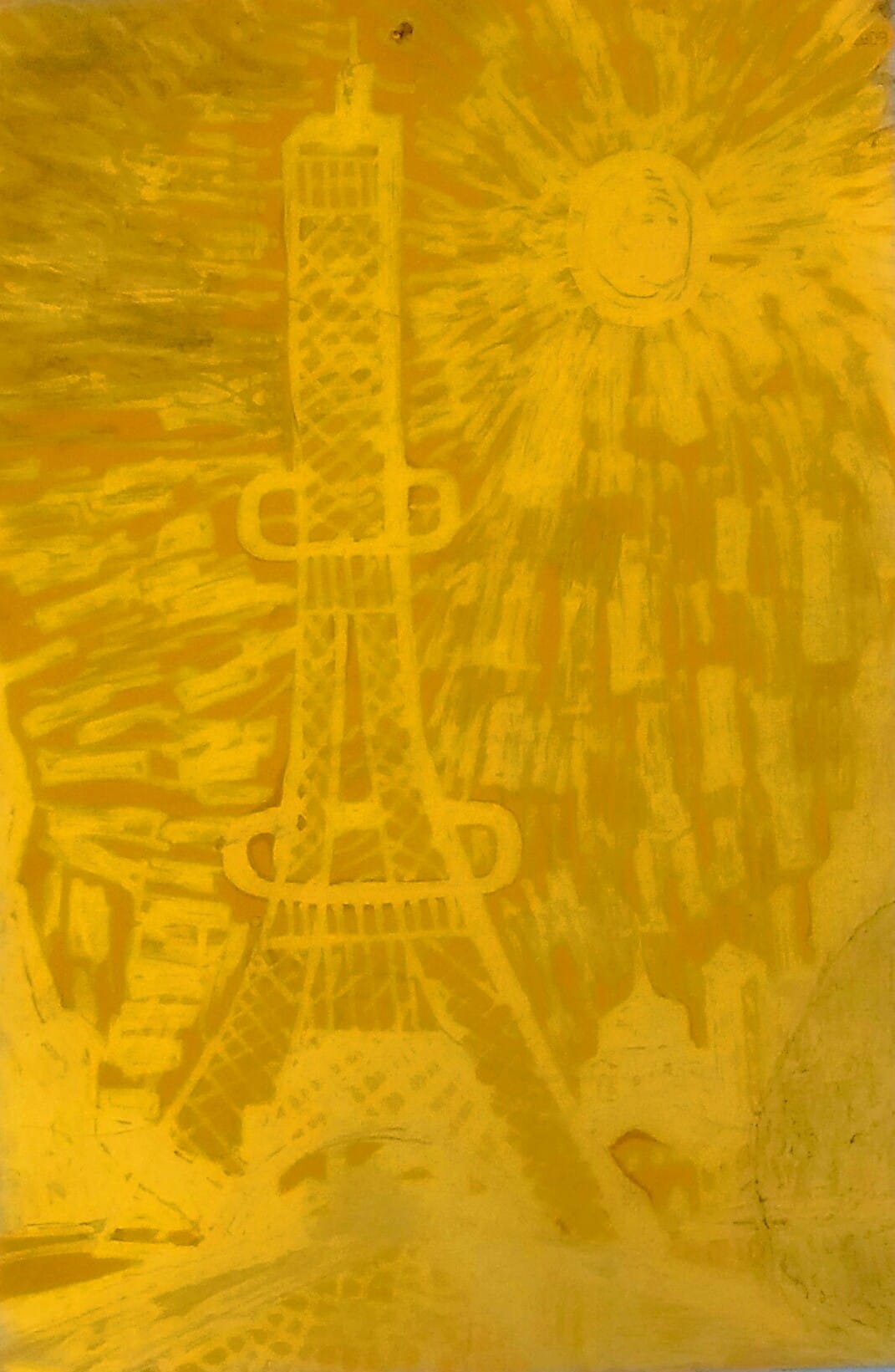 1. THE EIFFEL TOWER AMID KINGDOM COME (mixed media on board)

So, after a twenty year hiatus, I began painting and drawing again in 2018, due to a writer’s block that forced me into this earlier-studied realm of creativity. In this, one of my first of paintings, THE EIFFEL TOWER AMID KINGDOM COME, I envision Paris after the Second Coming of Christ, when peace, love and joy will reign supreme on earth, and there is no more war, famine, or strife. I portray a “Golden Age”, when Angels, saints, and believers in Christ will encompass the world during the thousand year period depicted in the Book of Revelation, in the New Testament of the Bible. 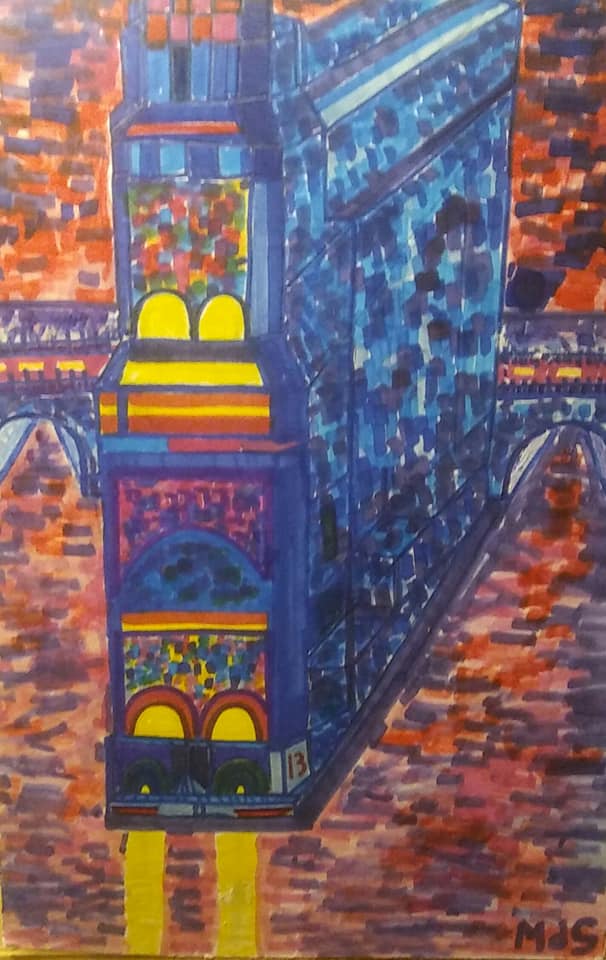 2. A CITY IN THE KINGDOM OF HEAVEN (marker on board)

In the painting, I imagine what a city in Heaven might look like, suspended on the air, the air of the sky moving under the bridge as though water. Of course, above the bridge, and below the bridge, we see the same colours, suggesting the elevation of this city-portion of Heaven. The structure in the painting came from my imagination, completely. I began to paint by imagination after seeing some of William Blake’s inspired paintings. 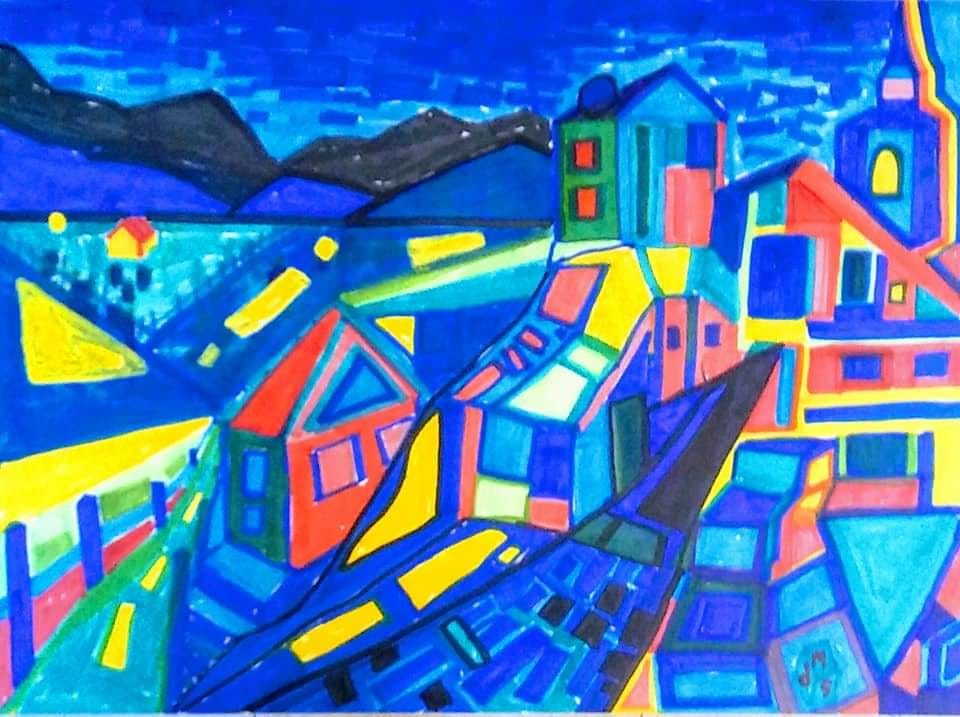 3. A FUTURE FARMHOUSE AND ITS LAND (marker and gouache on board)

This painting was, too, generated and painted from my imagination, wherein I saw what a future farmhouse and its land might look like in a hundred years, when there is a resurgence of divisionism, but not in just painting, but in reality, as displayed in this picture. Like a work by Escher, some parts seem impossible and both visually wonderful and visually impossible to fully understand or appreciate because of certain geometric anomalies in the painting, which was executed in late 2019, during a snowstorm. 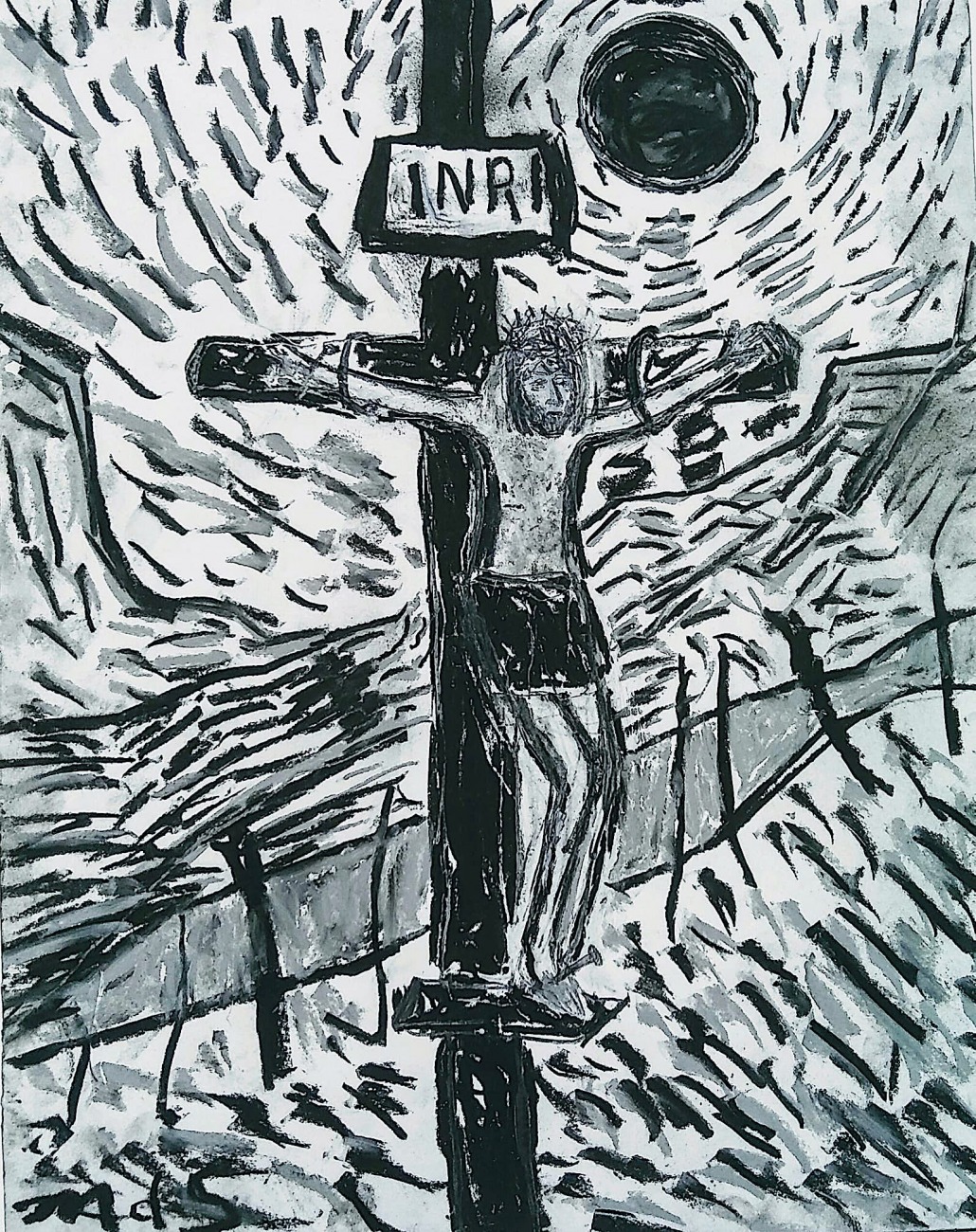 4. CHRIST ON THE CROSS (soft pastel on board)

Here is one of the first drawings I executed, in 2018, after twenty years hiatus from painting.  After having composed two other crucifixion scenes, in which Jesus was clearly harrowed, I wanted to create a picture of the crucifixion where Jesus Christ seems to be at peace, rather than in throes, because I wanted to be able to have a permanent vision of a Jesus who might have accepted his fate, or at least in this moment captured in the picture. The relative serenity in his face, considering his situation, expresses my aim exactly.

5. THE PANTHEON AFTER A SNOWFALL (marker and oil on board)

This painting was created in late 2019, during winter, in Canada. I had always wanted to see the Pantheon after a snowfall, so, I imagined just that, and then executed it upon a stretch of board. I added the white snow to lend the feeling of safety, peace and holiness to the viewer. Notice that, in contrast to the bland snow, the Pantheon and surrounding buildings are electrified with pure, neon colour, giving an updated, hyper-modern feel to the composition, while at the same time retaining the elegance and universality of the Pantheon. 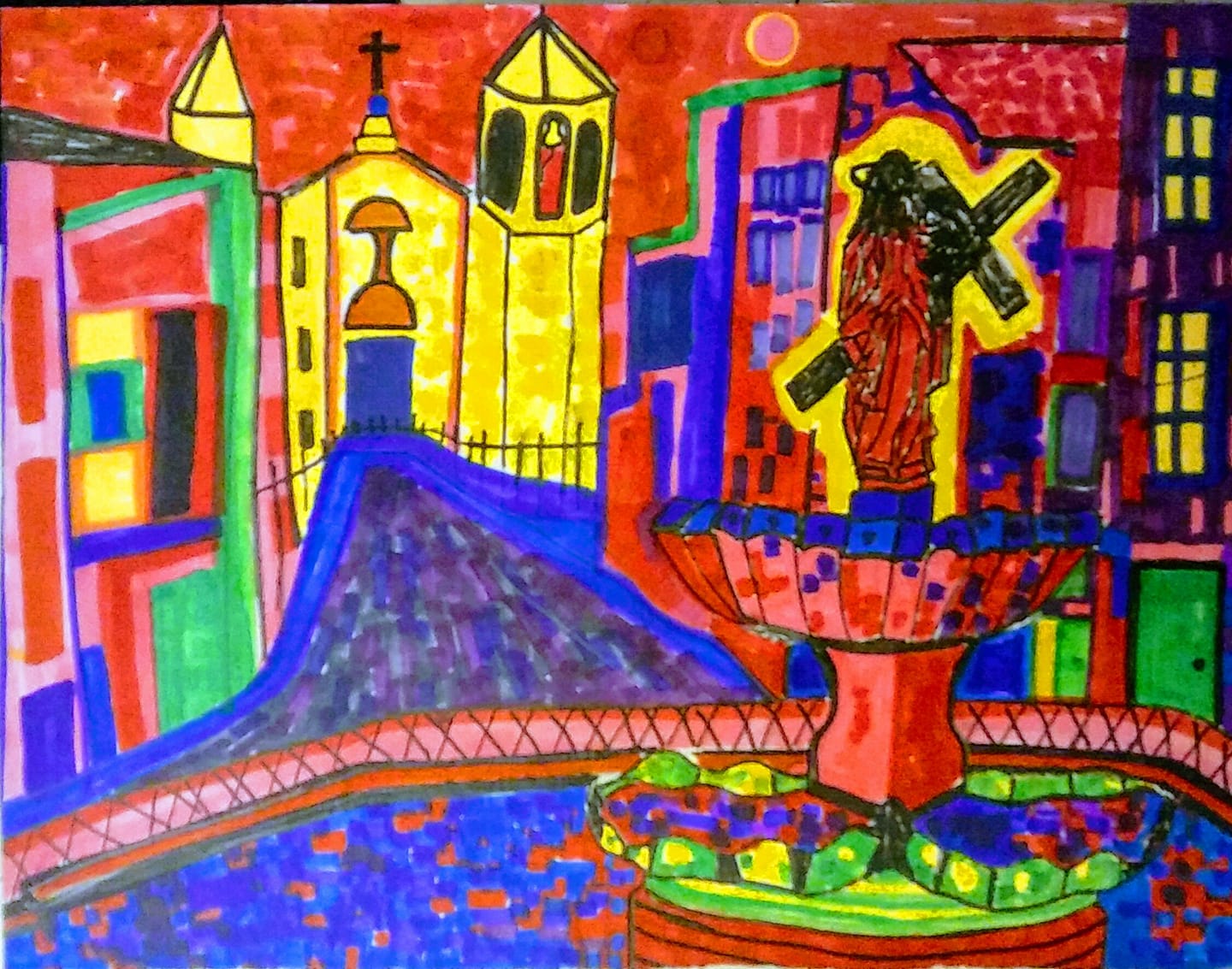 6. THE FOUNTAIN OF IDENTITA IN RACALMUTO, SICILY (mixed media on board)

The Fountain of Identita, which not longer exists — it was demolished in the late 20th century — once stood in the centre of Racalmuto, Sicily, wherefrom my mother and her side of the family came in the 1950’s. By way of imagination, and by way of imitating an old postcard of the Fountain, I created this painting, which I wanted to be so illuminated with pure colour that no one would ever forget the fountain, despite its nonexistence, today. 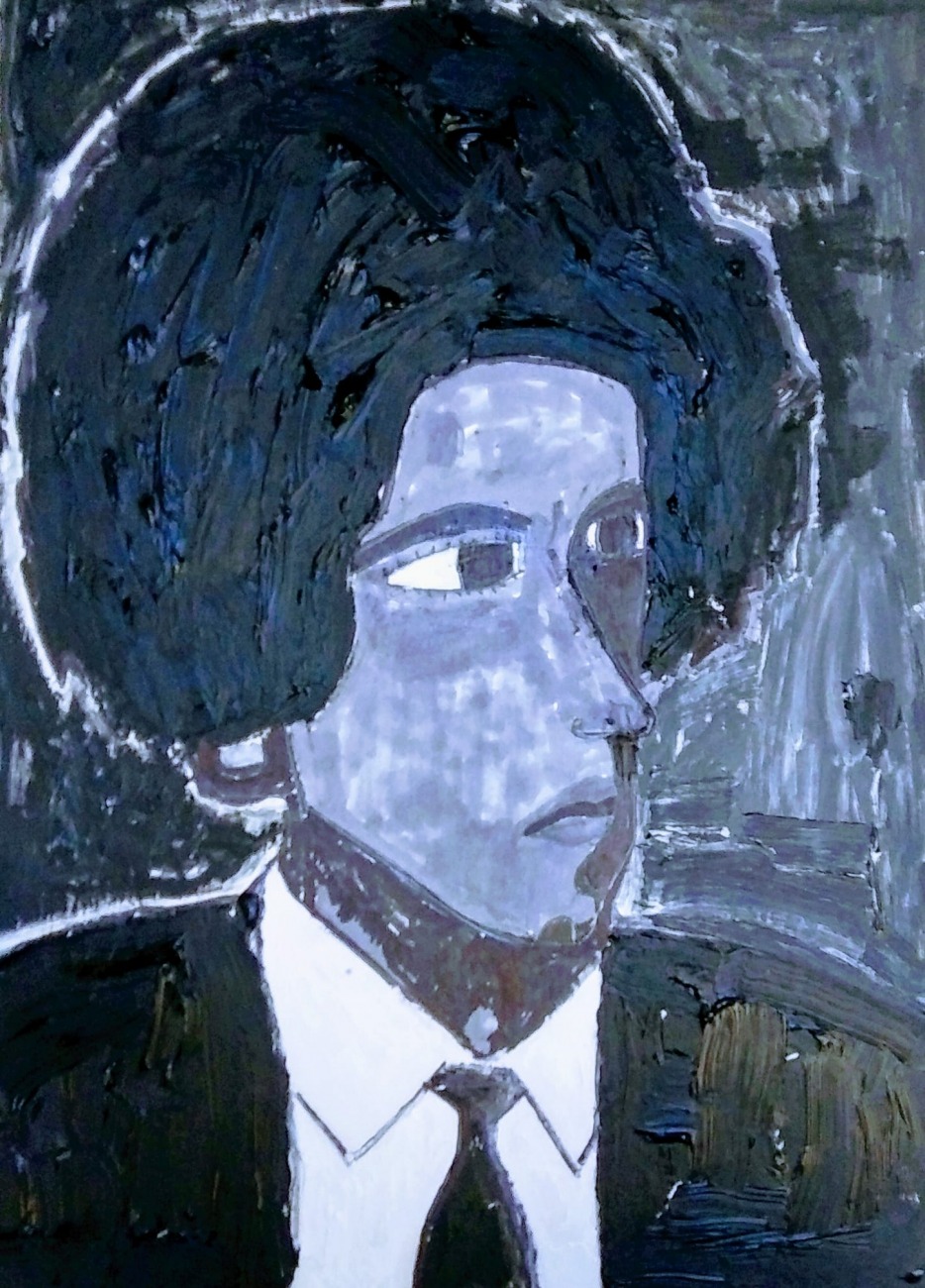 7. SELF-PORTRAIT WITH LONG HAIR (marker, oil and gouache on board)

In this, my first ever self-portrait — i painted it in 2019 — I attempted to transmit the image of my face from a photograph onto board. The photograph depicts me at the age of twenty-seven, when my hair, unlike today, was extremely “big”, thick, and long. Though I do not have the courage to grow my hair this long again, I figured I would at least capture it in painting. As you can see, I used to do my best to dress well in those days. 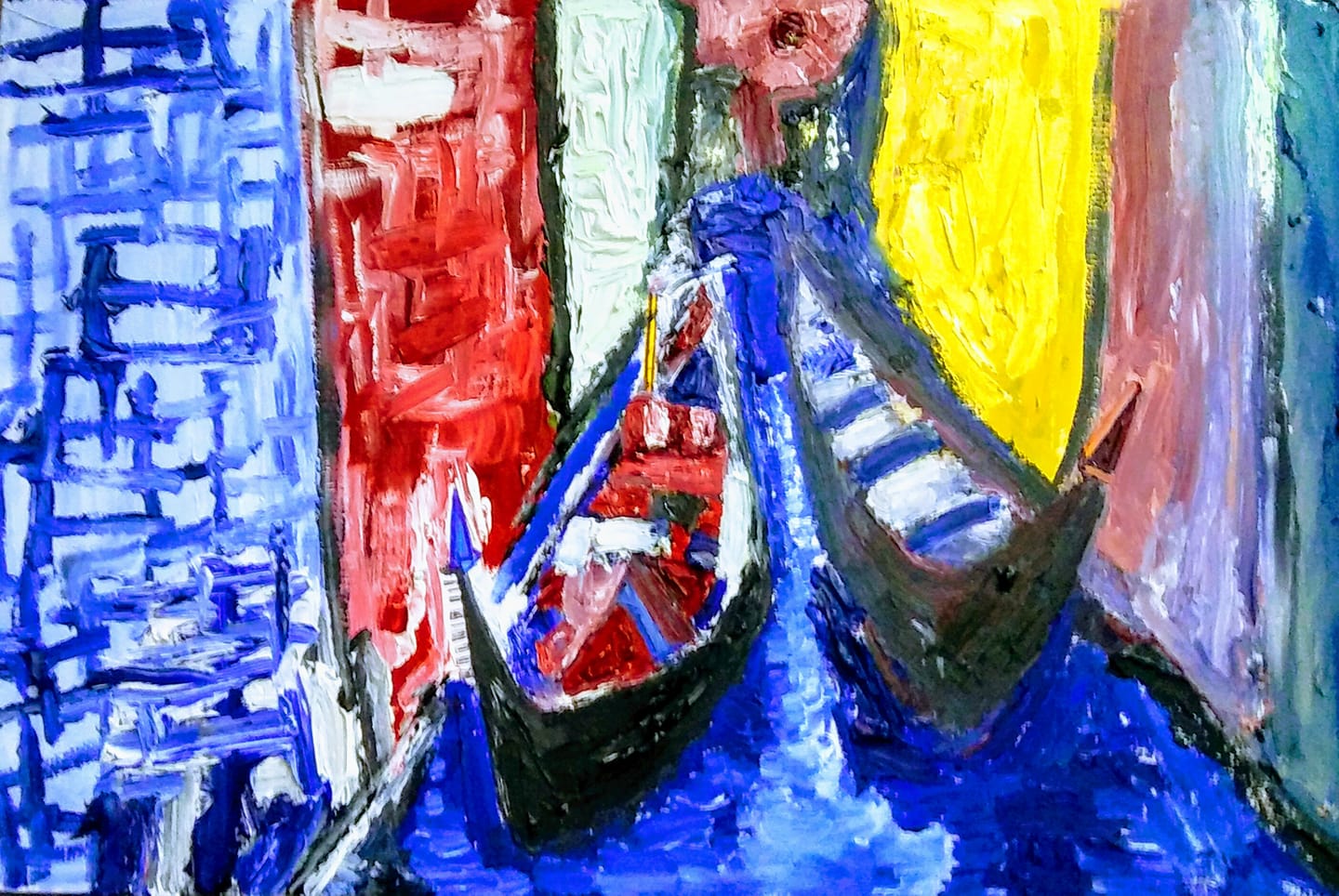 8. A VENETIAN CANAL WITH GONDOLAS (Oil on Board)

In this, my first pure oil painting in twenty years, I successfully, by way imitating a photograph i had taken in Venice, long ago, depicted two boats in a canal, at about sunset. The boats are not gonadliered, suggesting the day is at a close. I attempted to use an impasto style in the piece, in order to portray the denseness of the beauty in that immortal city. 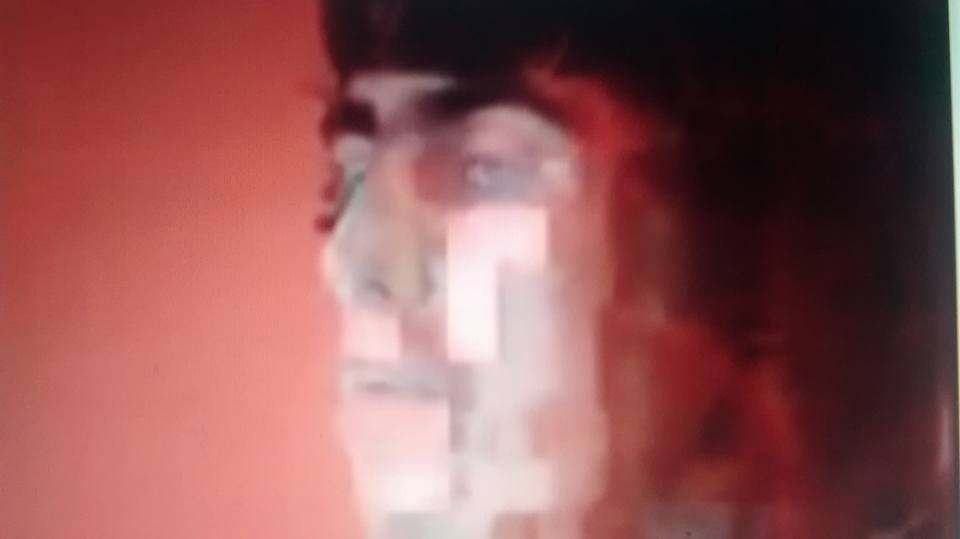 Here is a depiction of the Irish-blooded singer and superstar, Liam Gallagher, from the band Oasis (1991-2009) — a depiction of the rock star at his peak, in 1995, around the time when Wonderwall, their biggest hit, was released to the astonishment and happiness of Oasis fans. This is one of my few works that was BEGUN tweny years ago, but finished most recently, in 2020. My greatest challenge, here, was to truly achieve semblance of Gallagher, which I believe I have.

10. SELF-PORTRAIT WITH RED HAT AND WINTER JACKET (Oil and Pen on Board)

Here is my second ever self-portrait, which depicts me in the present, as opposed to when i was twenty-seven, like in the aforementioned self-portrait in gray. As you can see, the Jacket almost looks like Napoleonic era military fatigues, but this was unintentional. All I wanted was to paint something that would resemble me — and my current coat — and i think I succeeded! 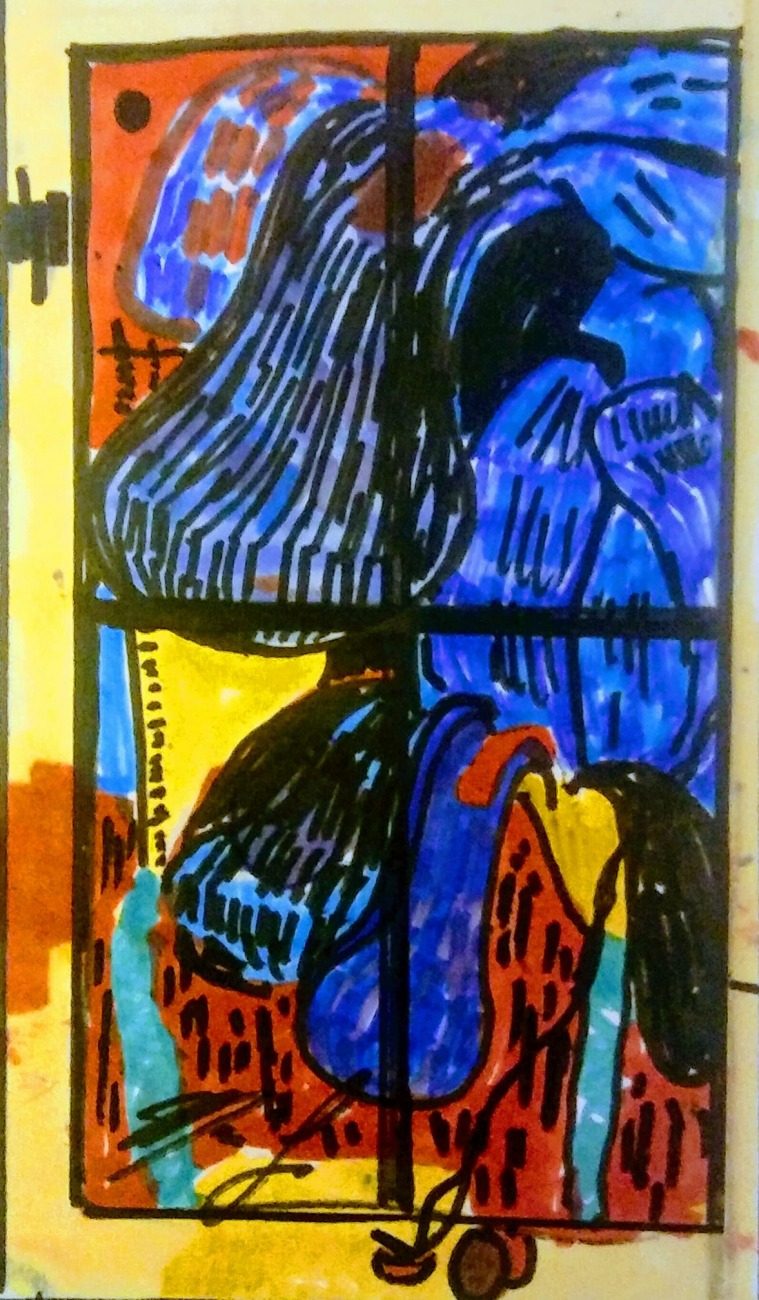 11. QUARANTINE (Mixed Media On Paper Mounted On Board)

This painting is designed to capture the feeling of isolation induced by the quarantine in which most of us have living, since the beginning of the Covid Pandemic, which has had untold effects upon the minds of so many. This painting reflects the psychological, rather than the physical effects of Covid, since, too often, the effects of the pandemic on the minds of millions have been overlooked, or, to me, underreported. 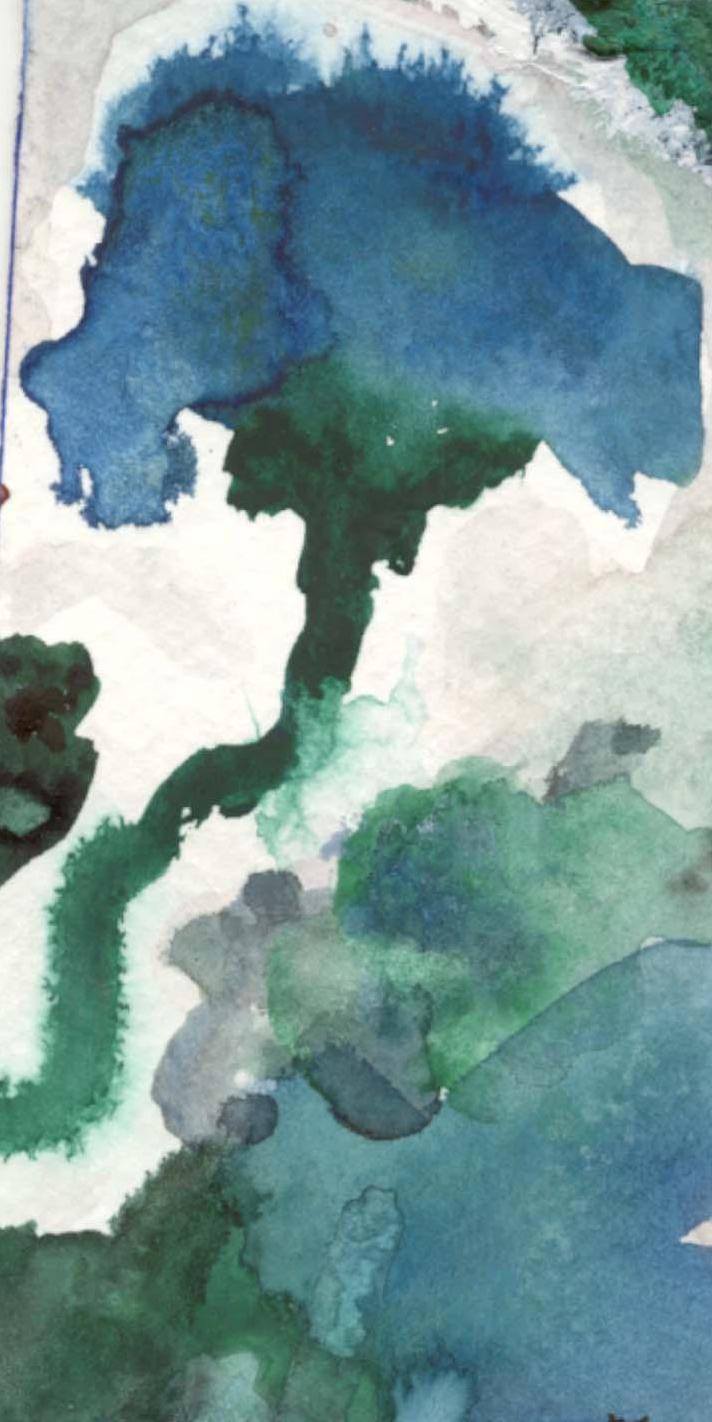 12. ONE BLUE FLOWER (Watercolour on Paper)

Finally — and for old time’s sake — here is an example of one of my paintings from the old days — from tweny years ago — when I had recently discovered painting. In those days, I was in love with the delicacy of watercolour, and had not yet explored oil painting, or even drawing, for that matter. The sublime uncontrollability — the riskiness — of watercolour, enthralled me. In this particular painting of a blue flower, the viewer is hopefully taken aback by not only the precision, but the acquiescence of the colours of work therein. I consider this my first real painting. I hope that you find as much pleasure in viewing it as I had in creating it.