Tumbling Towards Home is a short documentary, a coming of age story about Malcolm Adams, an Irish immigrant who moved to New York in 1989 to study acting under Alan Langdon. He works through the grief of losing his mother and friend Philip Seymour Hoffman. This leads to a decision of where to place his hat down and call home.

The film delineates themes of identity, homeland, narratives across cultures, the arts, addiction and how to overcome grief. The film also explores the family unit, family on a psychological level, parenthood, domestic violence and references colonization and PTSD. Tumbling Towards Home explores the liminality of cultural boundaries, shifting between cultures and perspectives on the Irish diaspora, both leaving and returning to the homeland. 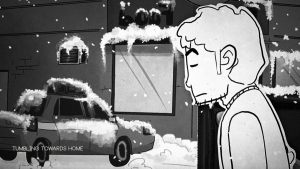 I decided to collaborate with an animator for the first time to complete Malcolm’s backstory as it would have been difficult to recreate footage from the 1980’s when he previously lived in New York.

I also had access to a home movie shot on super 8mm by Malcolm’s dad from Ireland in the 1970’s. I then had the aesthetic challenge to combine all of these different elements in the film and make seamless the transitions between each genre. The film provides a more hands on engagement with the research while the written work provided context. 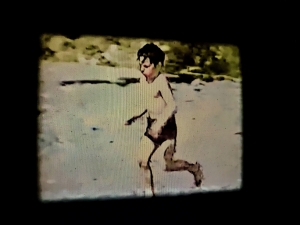 The film is being presented at Fordham University as part of an Irish Women Writers Symposium 2020.

The documentary can and of itself be a form of a hybrid film. My previous film Bricks, Beds and Sheep’s Heads, that I shot in Morocco was a narrative film, but audience members experienced it as a true story. There is a sense in the documentary that you are presenting a perceived version of the truth of a situation. In fact, the documentary can cross over into narrative as you dramatize the story for a viewing audience. This allows the filmmaker to blur the boundaries between truth and fiction.

Through the process of making this film the concept emerged of a cultural misfit and how this is accentuated when a person is required to shift between cultures. In this film I explore the concept of returning to the homeland and possessing an otherness or difference that gives you new insight and perspective on the culture you left behind. This creates a gap of expectation from the inhabitants who never immigrated. How does this aspect shift the perspective of national identity within a given country? 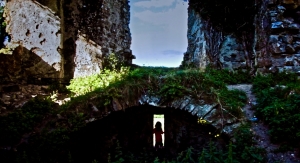 While this film views a story of returning to the homeland it evokes the complex emotions that are stirred when ghosts from the past haunt us and how memory plays a vital role in this comprehension. While working on the film I coined the term “Memory Pockets” and I found myself combining my own memories with that of the visuals I was choosing. For example, I filmed the sign “Suncroft” this is the village where my own mother lived. These “aha” moments became self-reflexive for me. In fact, that is what the film explored is the ability to exercise self-reflection on ghosts of one’s past. So, I found myself trespassing on my main protagonists’ story as he looked back on his life, I too as an immigrant felt an overlap in the emotional content of the film. It helped to deepen the process and exchange and ultimately tell a more compelling story.

In participating in telling Malcolm’s story, the film coaxed me to explore the liminality of the spaces in between staying away and returning to the homeland. This “small death” of exile impacts so many individuals and the mystery and wonder that unfolds when you leave and return. Inevitably every choice you make as an individual you gain something, and you lose something, but what creates a bond whether coherent or mysterious can be unspoken and unsaid and in fact transcend culture.

I gained an understanding of the depth of defining a homeland, I understood that identity is complex and does not only have one dimension, and the ability to exercise self-reflection is a treasure when it comes to a person’s past.

Trauma and addictions are passed down from one generation to another and it’s complicated for a family to transcend these dysfunctions. In addition, colonisation impacts a culture far beyond the end of the direct period. It can take centuries for a country to recover from being colonized.

It is complicated how these elements play out in a nation’s history. When Malcom speaks of his grandfather fighting in two World Wars, and how he suffered from PTSD the agony of his destiny is amplified. Through reflection on the themes in the film and engaging with the process of crossing cultural boundaries, I had the opportunity to expand my thinking, experiment with different film aesthetics and hopefully told a compelling story that audiences can relate to on an emotional level. There is a relentless tension between leaving the homeland and returning, and I hope to shed light on the many complex issues surrounding these themes.